We're Going to Miss Them

As we said so long to the beautiful beachfront condo, the ladies posed for a farewell photo. 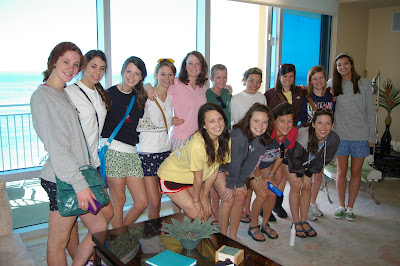 I would like to say the trip home was uneventful, but that's simply not true. At our first gasoline stop, somewhere east of Pensacola, one of our young drivers locked her keys in her vehicle. This caused a considerable delay while we waited for a locksmith to arrive. 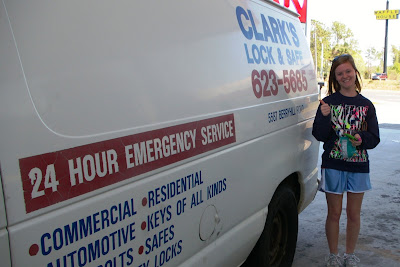 Her explanation for "How could this happen?" was plausible. She was driving her mother's car. The car she usually drives has keypad entry, so she has a habit of leaving the keys inside the vehicle. She was a good sport about it, which is a good thing because she endured her share of grief from her buddies. 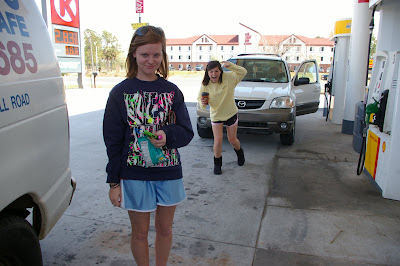 The delay provided an opportunity for a brief drivers' meeting.

We discussed the route home and decided to drive through south Louisiana instead of going northward through Mississippi and across the northern part of the state. While that added an hour or so of drive time, it prevented us from driving directly into the setting sun.
The timing was thrown off a little by the locksmith issue, so the lead vehicle (me) made a command decision to turn north on one of the old highways so the sun would be on our left late in the day and not be shining right into our eyes. This provided a chance to pass through little towns like Cheneyville.

And for reasons only they can truly understand, the people in my van were fascinated by our brief trip through Bunkie. Apparently, they had encountered a group of girls from there during one of their outings and found the Avoyelles Parish ladies to be hauty. 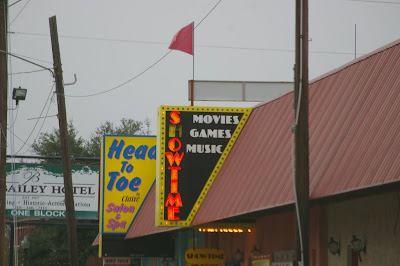 Everything you need to know about the collective attitude of this crowd can be summed up by an unsolicted statement made by one of them as we drove along the old road. A red-tail hawk flew ahead of us while an egret blanc was perched in some water along the side of the road. She said, "It's nice to get off the interstate for a while. You really get to see Louisiana."
We made it home a little late but safe and happy. Their parents picked them up and we had a brief closing ceremony in our front yard.
A week ago I knew a couple of my fellow travelers rather well; some of them were just acquaintances, friends of my daughter. Others, I had only met once or twice before. Now, I'm in love with every one of them. I would adopt them if their parents would let me.
We're going to miss them. It was a week I believe none of us will ever forget.