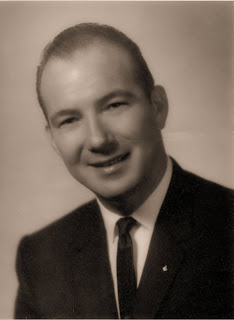 (Haughton, LA) - One of the great male influences of my youth has left us. My Uncle Dewey, my mother's younger brother, passsed away this morning at his Haughton home.
He and his sons are the reason I am a sports fan. I saw a major league baseball game for the first time when I tagged along with them in 1966 on a trip to see "The Eighth Wonder of the World," the new dome they had built in Houston. The Astros played the Mets. I don't remember who won, but I remember the "exploding scoreboard" in all its wonder.
I distinctly recall learning the rules of football while spending weekends at his house, as he patiently explained to me what "first and ten" means. We would sit around in his den and watch the Indianapolis 500 and he seemed like the smartest man in the world when it came to auto racing. Of course, he didn't let on that the race was on tape delay and he had heard about the results earlier in the day on the radio. 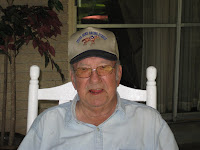 As I was visiting him in his last days, he recalled with great humor the trip to Houston. Apparently, I was fretting because we were running late. He said he told me that we might be a little late, but everything would be okay. He remembered 6-year-old me responding, "But if we don't see the first pitch, we don't see the whole game." I laughed when he told me that and said "Well, it was true then and it's true now." At least our relationship was consistent. 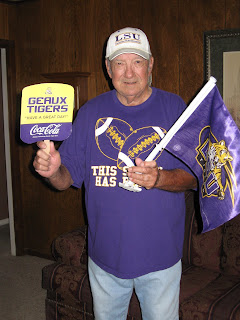 He taught me to love the Dallas Cowboys and the LSU Tigers. His indifference toward the New Orleans Saints was legendary, so there is significant irony in the idea that the last Super Bowl he watched was the Saints' first.
He was the last immediate connection I had to my mother. My cousins tell me in his final days, he spoke of her often. He loved his big sister and thought she was a wonderful woman. The last time I spoke with him, he reiterated that to me.
Avuncular to the end, he called me by childhood nicknames as recently as two weeks ago. It saddens me to think no one else will address me in those ways again. I lived a lot of my younger life in his house and in his company. I'm grateful for the time and attention he and my aunt and cousins gave me. There was a lot of laughter in that house. In his eight decades, he experienced his share of sadness, too. On this day, it is best to recall all the happiness.
There has been joy and adventure in my life centered around sports and truly it all can be traced back to his influence in my life. If I were to sum up my perception of my uncle in one word, it would be easy: "Fun."
The world is a little less fun today because he is gone. I hope somewhere he and my mother are having a good laugh.

Great eulogy Darrell. I am sorry the loss you have experienced. Your surely have done your uncle proud. Geoff.