Eight and a Half Decades of Life

My father turned 85 today, and celebrated by having a new garage door installed at a warehouse he owns in Bossier City. As odd as that may sound, few things make him happier than hanging around that old building which until thirty years ago housed his business.
The company has been shut down for thirty years and the Old Boss has been happily retired for that long, but he still rents the place and hangs around there whenever he can find an excuse for it.
When he’s there, he can be with his long lost brother, who was also his business partner. He can be with all the friends and rivals who made him who he is today. So, when I heard that’s where he was, I was happy. 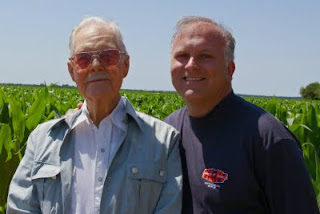 I found this out when I called to wish him a happy birthday and to ask him if we could take him to dinner. He enthusiastically agreed, as you might imagine. The adventure began when I tried to nail him down about where he wanted to go. He said “That fish place by the waterfall.” I had no frame of reference for a waterfall and there are several “fish places” around town. So, I had to use my crack investigative journalism skills to discern the location. Fortunately, I had most of a day to accomplish this.
I called a couple of his friends and found out he likes a casual steak & catfish place across from a local water park, so I was confident we had it all figured out. I wasn’t 100% sure, though, until I had picked him up and we were well on our way.
From divergent compass points our little family gathering coalesced. Once gathered, we watched him slowly sip a couple of longneck beers to prepare himself for a methodical annihilation of a plate of catfish and French fries. I’ve never known anyone to stretch out a meal like my dad can; and by now everyone knows his tendency, so we just strap in for the long haul. 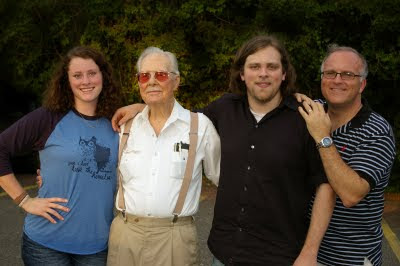 My wife and I sat across the table from the birthday boy and his two grandchildren. He dispensed advice and wisdom on a variety of topics, starting with the dangers of highway driving and going all the way through the state of the U.S. economy. You see, he was surprised we didn’t have to wait in a long line to get a table on a Friday night. He’s convinced people are simply spending less money these days because they have no confidence in the direction our country’s going. He may be onto something. 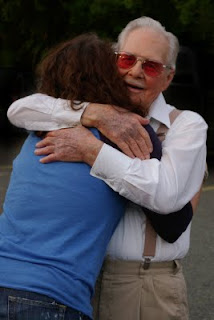 I read recently that old stories are like old friends. It’s nice to visit with them every once in a while. So, we heard refreshed accounts of some of his greatest tales and generally just relaxed while we ate and swapped stories.
It was my daughter’s kind of evening. She often speaks of “just hanging out and loving each other,” and that’s exactly what happened at the fish place by the waterfall.
On the ride back to his house, my father was uncharacteristically emotional, saying “I know you’re proud of your family. I am, too. I can’t tell you how much I love those grandkids. I couldn’t think of a better way to spend my birthday.”
Neither can I.