(Destin, FL) - Together on this trip are two age groups: 18-19 and 15-16. They are getting along remarkably well, but there are easily discernable differences. For instance, the older girls have been consistently waking up at least an hour earlier. It may be because the room several of them are sharing gets spectacular morning sun. 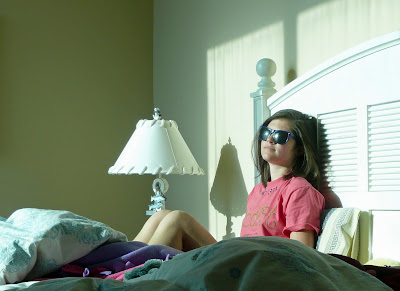 As the morning convergence of age groups slowly progressed, we noticed that several of us had similar thoughts on proper attire for the still-chilly start of the day. 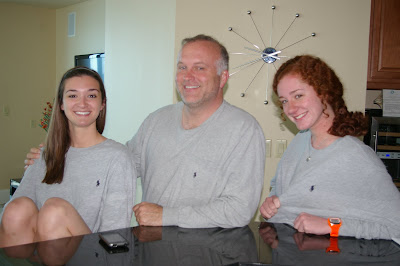 Somewhere, Ralph Lauren is smiling.
Sufficiently fortified with cinnamon rolls and bacon, the girls assaulted the beach once again. 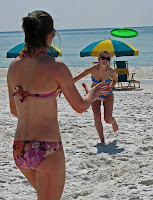 No longer content to simply lie in the sun, they broke out the frisbee and the soccer ball.
Interestingly, they continue to operate as a group. The only exceptions have been trips to the grocery store and in-condo meals, where they have a tendency to eat in shifts. They compare notes and plan activities together, concerned about consensus. I said, "Hey, there's no rule that says you have to do everything together." But, so far that's what they want and there's certainly nothing wrong with that.
This includes finally braving the cold, cold Gulf of Mexico. 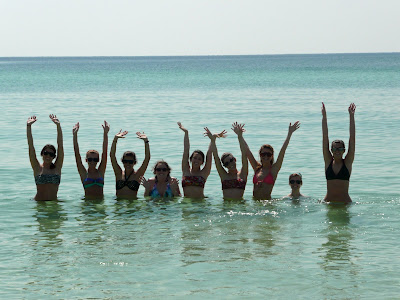 "Bracing." "Invigorating." Use any word you want, but "cold" seems to work best. 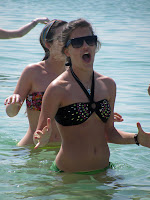 It was their foray into the surf, they say, that attracted a group of "frat boys." Several of the guys, as the story goes, followed them into the water. They just couldn't handle it.
"How are you not frozen?" was some approximation of how the guys tried to engage them. "I'm not drunk enough to handle this." And so, the taunting of guys continues.
There have been Rapunzel moments. Trust me, a group of girls this size cannot go unnoticed. As far as I know, no one has let down their hair, but the ladies have been speaking to people from the balcony. 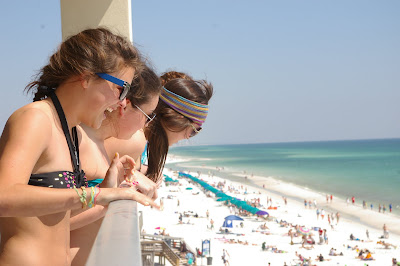 When you are dressed as they are, you do what must be done to stay in shape, so somebody dropped in an exercise DVD and a few of them worked on toning their abs... 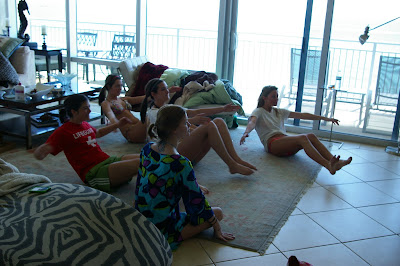 Never a dull moment around here. How can there be with these people all under one roof? 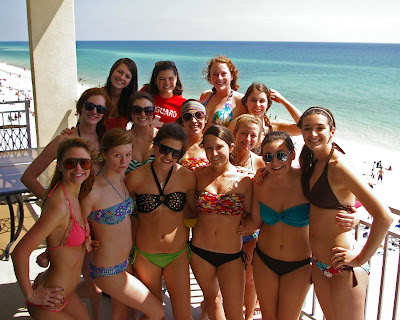 Well, I've wanted to post a comment after every blog.
With each blog, I've smiled, laughed, nodded my head and even shed a tear.... The name of your blog couldn't be more perfect. You are a good "story" teller! Rebecca's mom

I've loved every one of these updates myself. I feel like I'm ON the trip rather than reading this in Seattle. I'm SO glad you went on this adventure and then shared it with us. Inspiring:)