Back on the Radio 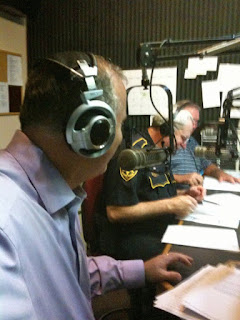 Morning commuters in north Louisiana were compellled to switch their radios off with prejudice this morning due to the phantom appearence of a fill-in sportscaster.
The day started before sunrise. I was asked to prepare morning drive sportscasts on the local "greatest hits of all time" (formerly oldies) station. The regular sportscaster, a man with whom I worked closely for many years, was out of town. So, I showed up and occasionally spoke into the microphone.
I had to write sportscasts and present them formally. It was the first time I had done it this way in about seven years. All of the broadcasting work I've done since I left the business full-time has been extemporaneous in nature, either a talk show or play-by-play or sideline reporting. So, to write copy was a skill from my somewhat distant past. It was alarmingly easy.
My goal, as always, was to not embarrass the morning drive team, the radio station or myself. Objective achieved, I think.
This was really a thrill for me. 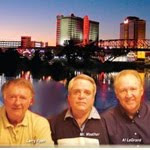 I was on the air live with local broadcasting legends Larry Ryan and "Mr. Weather," while filling in for Al Legrand.
In my youth, before there was such a thing as FM radio, these guys were broadcasting kings in our town. On the way to school, this was the radio team on in our cars. We would talk about what they talked about.
I've worked in the same market with Mr. Ryan, on and off, for more than 30 years. This was the first time I've shared airtime with him. It was an honor. Later this month, I will have the privilege of doing so for a full week.
Get the coffee pot ready.