Back to The Headsets

RADIO PLAY BY PLAY
Originally uploaded by Darrell
The Arena Football season has begun, which means another 18 weeks or so behind the microphone. Sadly, My Boys lost their opener, 55-54 by blowing a 20-point fourth quarter lead.
This means another spring and summer of exotic destinations.
For now, though, it's good to be home even though we lost.
The vacation went by too quickly. I think being bedridden for the first day and a half might have had something to do with that.
As for the game, our big off-season acquistion fumbled the ball away in the red zone TWICE. He told me afterward that he cost the team the game. It's hard to argue with that. 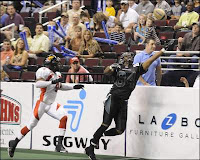 The good news is, the team they lost to is really good, which leads us to the conclusion that our guys must be really good, too. Any time you can commit five turnovers and lose by just a point, you figure to be okay in the long run.
We'll get 'em Friday when we're at home again. The next weekend, it's off to Houston, which isn't bad at all.
Game photo by Jim Hudelson of the Shreveport Times. Sphere: Related Content