A Terribly Different Kind of Sand

While my family and I are enjoying the gift of freedom, lazily enjoying a seaside retreat, our old friend Joel has been sent to Iraq for the fourth time. He's on his way. Here is a photo from today in Kuwait: 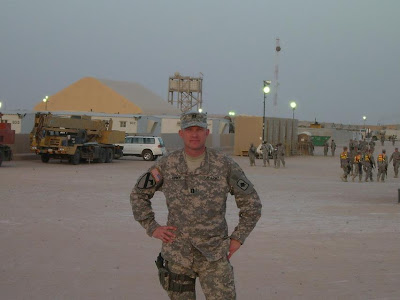 I spoke to Joel an hour or so before he left his wife and two young daughters yet again. He is willingly placing himself in harm's way to fight terrorism and to restore order in Iraq. It's business for him and we admire his courage and commitment.
In 2005, Joel came home from fighting in Iraq only to be shipped out less than a month later to New Orleans to help with Katrina relief. He saw some of the worst and the best the world had to offer on disticntly different fronts. I remember him saying at the time that New Orleans actually was more emotionally challenging for him.
He is blogging now. You can read and see more here.
I will also post a permanent link on the right side of this page.
He used to occasionally call from Iraq. Knowing he was as safe as he could be, I would kiddingly call him "Baghdad Boy." This time, for some reason, I don't feel like joking around.
Pray for Joel and his ladies. Let's hope he makes it home safe again.