The Dude Will Abide I did his hair.
Originally uploaded by One-half of the Happy Couple
Years ago, I started affectionately calling my son "the Dude." this was a reference to Jeff Bridges' character in the film "The Big Lebowski," a cult hit.
I fear this has become a self fulfilling prophecy. If you haven't seen the movie, trust me that "the Dude" is not necessarily someone you would want your son to emulate. 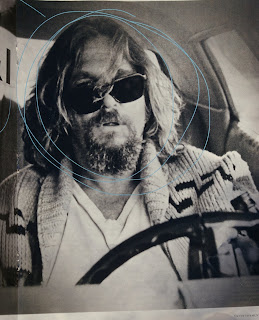 The Dude is not a role model, even though he is outrageously funny.
Entertainment Weekly has a feature article in its current issue which celebrates the 10-year anniversary of the film's release. The magazine has a full-page photoillustration which uses a screen shot from the movie.
Need I say more? Sphere: Related Content

Labels: The Big Lebowski, The Dude Will Abide

The best movie ever about a man in defense of his rug.

Well, the rug DID tie the room together.