At Least We're Getting Some Rest

Cold on the beach
Originally uploaded by Darrell
We're on the gulf coast with The Happy Couple in tow and it's COLD. You don't go to the beach expecting freeze advisories, but that's what we got. The good news is, temperatures are expected to rise into the 60's today and the 70's tomorrow. The timing isn't as unfortunate as it might have been. The long-range forecast is calling for thunderstorms most of next week.
Our young female travel companion is also struggling with a stuffy head, so she didn't have a lot of energy on day one. At least she was on her feet, which is a lot better than how I found myself. 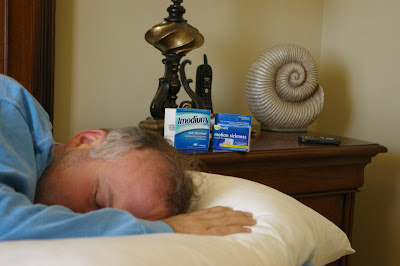 About an hour after we arrived at our fabulous beachfront condo, I started paying back my dinner. And my lunch. And the Diet Cokes I chugged to keep me alert on the nine-hour drive.
The sickness kicked my tail. I tried to get out of the bed several times. After all, we are on vacation. I couldn't make it more than a half-hour without collapsing. Having spent some time in emergency rooms over the last two weekends, I refused to go to a doctor. Instead, I loaded up on over-the-counter remedies and tried to will away to urge to hurl.
My wife has a sense of humor about all this. She even took pictures to illustrate my misery and her boredom. I was alert enough to polish off a book in one day. 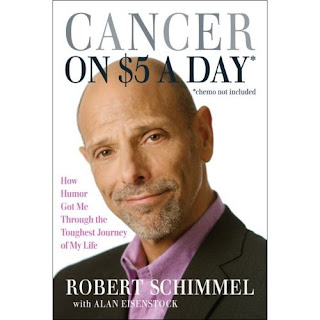 Robert Schimmel's Cancer on $5 a Day was difficult to read sometimes, but it is inspiring. I recommend it, particularly to anyone who has dealt with cancer. Sadly, it seems like that's just about everybody.

I got up in time to see a pretty spectacular sunset:

At last, it doesn't feel like somebody kicked me in the gut then punched me in the head. Today, I plan to actually go to the beach. Sphere: Related Content