Papa Was a Passing Stone 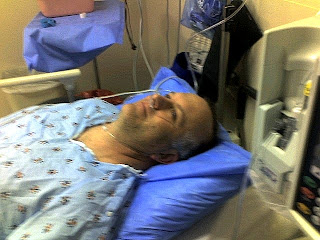 I spent most of Saturday bending over. That was until I found myself wearing a backless gown, flat on my back with pain killing narcotics being pumped directly into my veins. It's never pleasant when you experience so much pain that you get sick at your stomach, but it happened to me.
I was passing a kidney stone. I thought I could gut it out, but about three hours into the episode, I was simply overwhelmed. I have a buddy who is a urologist and I reached him on his cell phone, but he was out of town. He offered to phone in a prescription for pain. I should have accepted the offer, but I was being stubborn.
After pacing around in the restroom for a while, I caught myself cursing aloud. A glance in the mirror revealed a pale complexion, red eyes and deep lines. To put it another way, I looked just about as bad as I felt.
The ER staff took me seriously. I was given IV Dilaudid, and it really helped. I got fluids to help replace everything I had lost by being so sick. Now, it's just a waiting game. The next few days I will be straining my urine. I don't recommend it as a hobby.
I'm still under the influence as I write, so I can't be held accountable. I just hope it make a little sense. The bottom line: Kidney stones HURT.

Pain Killer Passout
Originally uploaded by Darrell
My family seemed alternately concerned and amused by my plight. When I got home, I passed out. I mean that, too. It was more than sleep. Hours passed and I was completely unware. I had no idea I had become a kitty bed. I had no idea photos were being made. One moment, it was daylight and the TV was on. The next moment, it was dark, there was a roaring fire in the fireplace and there was a cat on my chest.
I'm glad the cat's name isn't Oscar, like the three-year-old feline in a Providence, RI nursing home. 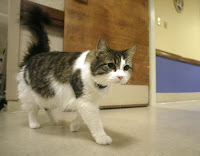 That cat curls up next to people just about two hours before they pass away. Apparently, I looked like death earlier in the day. My wife and daughter said at different times that I was green. My wife added, "I saw colors on your face I don't care to see again. Where do I stand? Apparently, the stone has passed from my kidney into my bladder, and that's what caused all the suffering. What do I have to look forward to? Perhaps it was summed up best by my 18-year-old son, who said "Oh, my God. Now you have to live your life in fear of peeing." Sphere: Related Content

Then there are always the worries of the frequent and urgent need to whiz, trouble starting, weak streams, small amounts when you go, the feeling you still have to go even when you just went, leaking, dribbling, and then the old blood in the whiz...oh, my friend the fun is just beginning...

Ouch!! I hope you feel better soon... hey have your docs determined what has caused your stones? You drinking enough water a day bud? As we get older, how our bodies react to minerals can cause the stones...calcium being one. Another is due to diet which leads to Gout. Too much spinach can cause similar problems as it's very high in minerals and can form crystalline materials in your system. And there's hormone activity in the thyroid that causes calcium-type stones.

Get with your doc and find out as these things can be prevented.

Thanks, Chuck. Yes, I captured the offending particle in a strainer. My urologist buddy called me several times to check on me and demands that I come in as soon as possible, stone in tow, for a "complete workup."
So, I will. I don't want to go through that again.

Can't keep her out of the dog food.

That's the sign of a serious blogger...making sure the pictures get taken in the hospital for the blog post later.