Silda Spitzer's husband is in big trouble. The lower photo shows the pair in happier times, when Mrs. Spitzer looked lovely. Now that her husband has resigned as governor of New York in disgrace, the strain is showing. She was forced to stand beside him as he offered an apology for employing the services of a high-dollar prostitution service. If recent media reports are to be believed, Mr. Spitzer has spent at least $80,000 to do whatever it is he does with those women.

There's been a lot of babbling lately about Silda Spitzer, Wendy Vitter and other political wives who have been slapped by sex scandal over the years.
Just once I would like to see, in the middle of the big mea culpa by her husband, one of the women stride up to the microphone and say something like this: "Look, here's the thing. Eliot has certain, let's say tastes, in the bedroom that make me uncomfortable. I don't want to participate in these activities. He has found an outlet for this, and I accept that. It's kept our marriage together. Yes, it's illegal and probably immoral. But, the way I see it these professional women are no threat to me. I'd rather him hire someone than cavort like that with a co-worker who might break up my family."
That would grab some headlines! Wouldn't it be refreshing, just a little? 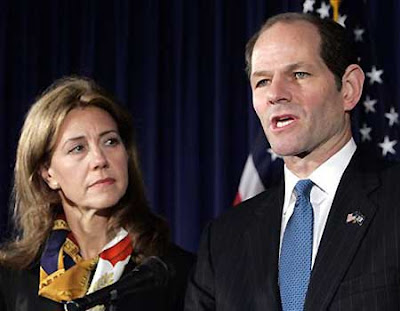 Indeed, it would be refreshing. Alas, you're about as likely to see such a scene as you are to see it reported by a talking unicorn.