Was I at the Tropicana?

Michael Buble
Originally uploaded by Darrell
We went to a Micheal Buble concert tonight. I wasn't sure what to expect. The tickets were a gift and dinner was thrown in for good measure, so it defintely was a pleasant evening. Before tonight, I couldn't have told you if I had heard a Michael Buble song. Having sat through the show, I can happily report I know two songs which clearly were his.
The rest of the time, I wasn't sure if I was watching Bobby Darrin, Harry Connick, Jr. or Clay Aiken. Buble did a little Elvis bit and even a Village People gag. He's very talented and engaged the audience well. He made fun of himself and got some nice laughs from the crowd. Music writer Keith Cera of the New Orleans Time-Picayune described it this way, after seeing Buble's show in his city earlier in the week: "Buble's smartly tailored suit of Rat Pack black was sturdy enough to accommodate the occasional drop to his knees or scamper off-stage. Skinny tie loosened at the collar, the 32-year-old unleashed his mischievous inner delinquent to counterbalance his precious treatment of romantic standards."
There were people there who were charged up to see him in person and hear him perform.
I'm glad I went. I came away thinking this show would fit well in Vegas in the 60's. That's a good thing, because it seems that's the feel Buble was trying to achieve. 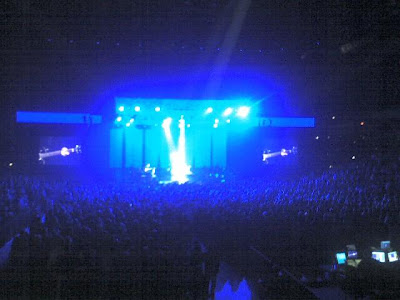 We certainly would have taken you along if we had known. I've been on the lookout for M.I.A. tickets.

Wait. I already got your M.I.A. tickets. SLipped my find for a second. You'll Fly Like Paper at Bonnaroo!

Yes! I know! She's one of the many I'm VERY excited about.