It's hard to say which is more challenging, parenting teenagers or fretting over aging parents. My wife said yesterday that one word will sum up what w're are presently experiencing: Worry.
She's easily worried. I'm easily frustrated. While the kids are running amok and there's not a whole lot we can do about it, we're busy paying it back to our surviving parents. My mother-in-law is holding up quite well in her first couple of months of being a widow, and we're proud of her. My father, ten years her senior, is hanging in there.
I spent a second consecutive Saturday in an emergency room. The phone rang at 3:00am and my father said he needed to go the the hospital. He has an overwhelming tendency to think the absolute worst. I guess that's because he's old and feels bad most of the time. He actually said, "If this is a heart attack, I hope its a big one because I'm sick of living this way." So, that's how my day started. 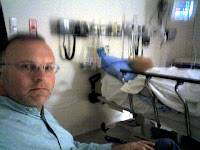 He's okay. They're running fluids into him because he is dehydrated. That's it. Since this is No Big Thing, I feel okay complaining about the other stresser that came into play here. He didn't call an ambulance. He called me. (That should have been everyone's first clue that it wasn't "the big one"). When I got to his house about 3:15am, he wanted me to take him to The Competition. There was no compelling reason to do that. Once we made it to the correct health care facility, he was glad that decision was made. He saw a real difference. It's nice to shake the hand that feeds me.
One day I will be able to sleep a little more and worry a little less, I hope. Until then, I suppose the circle of life will spin like a top.

Had to share this with you: my folks have passed on long ago so my worries aren't what they used to be. However my in-laws are still with us and they have reached the point where health issues are a daily part of their life. One of my in-laws recently experienced chest pains which would make one think that this is nothing to fool around with...get someone to take you to the emergency room and get checked STAT!! Nope..first thing that was done was to check the insurance policy to see if their policy paid for certain ER visits, unsubstantiated testing, etc...

Me and the wife were kind of well...ticked that this is the first thing they'd do. But in light of their increasing health bills and their penchant to be frugal, we could understand after we calmed down. But still...it's a sad day in our great nation where we arguably have the best medical care in the world that cost is the primary concern that occurs in the minds of older Americans living on fixed-incomes. Fear of not getting reimbursed for doctor visits is what keeps many older folks from seeking health care when they need it most. And preventive measures could make all the difference in surviving an episode instead of succumbing to it.

And it's not just confusing for senior citizens too for I get lost in all the insurance mumbo-jumbo of exclusions and limitations of coverage....it's as bad as trying to understand terms on a closed-end lease on a vehicle. As a self-employed independent businessman with a high deductible, I am getting to where I notice my high payments for simple things like annual blood work, routine exams and more recently physical therapy for a compressed nerve....gotta tell ya guys...I can see where older folks get "fed up" with it all.

BTW, everything turned out ok with the inlaws...just a little stress and chest muscle pain is all.

"One day I will be able to sleep a little more and worry a little less, I hope. Until then, I suppose the circle of life will spin like a top."

Don't wish for that day. We buried my mother this past August and how I wish I could get that 3 am phone call that I used to get. The worry will never stop as you have kids, a wife and other people that you care about. I just got back from the ER (the Competition) where we were in and out in less than an hour. The just turned 57 year old significant other has a pinched nerve that causes horrible headaches and they shot him up with a painkiller and anti-nausea medicine.

If you stop worrying, that means you have no one to love or care about. Not a good thing.

Mary, Good point.
Chuck...This is the most political Daddy D has been since we talked about Mike Huckabee's underwear.

LOL....Huckabee Briefs.. now there's an image I don't want to keep in my mind. As for me not worrying (don't worry...be happy is my mantra) I am pretty much the "Last of the Mohicans" family-wise. And other than Missus Chuckles (I'm known as "Mr. Cyndi") there really isn't much to worry about. But I also learned that even when my folks were alive and for the most part well... I really couldn't worry about them as they were who and what they were lifestylewise and healthwise and I felt that at the end of the day: "...it ain't up to me..."

Now not to say I wasn't concerned but I learned early on as a younger adult that...try as I did....I couldn't impress upon my folks to do certain things like:
A. Stop Smoking... B. Eating better C. Don't drive at night in the rain when you can't see well enough in broad daylight. In short...if I let them, their day-to-day behaviors would drive me nuts (and it often did).

But I learned through sharing this frustration with close friends that I wasn't responsible for their well-being nor their happiness...and when I finally realized that...a tremendous weight was lifted from my mind. And so the worry was practically gone. Now..not to say that I didn't get upset from time to time...and I sometimes find remnants of anger at how miserably my folks managed their later years...I had to realize that they were who and what they were...and they were who they had become... and I had to let go no matter how much I felt I could affect or influence change.... it had to be from them for them for it to work. And so it went.

Yes.. I do miss the folks...mom died at the young age of 55 and dad stroked out at 55 and lingered until 65. Miss them yes...but I quit worrying years ago but the love did and always does remain.

And so it goes.