The Strand
Originally uploaded by darebouche
This never happens. I went out with a group of guys: Steve, Chuck, Cliff, Charlie, Sonny, Mike and Robert. We saw the Bob and Tom Comedy All-Stars at the Strand Theater. It was a great show featuring hysterically funny stand-up comedians. 1700 people packed into the historic venue and we laughed until our heads hurt.
I was honored to be included. I like all of those guys, who I know from work. The thing is: Robert, Chuck, Steve, Sonny, Charlie and Cliff ARE ALL MY BOSSES. If they weren't so nice, it would have been intimidating.
Bob and Tom are the hosts of a nationally syndicated radio show who make household names of lots of comedians.

Patty Vasquez, Nick Griffin, Greg Hahn and Ralph Harris hit the stage, but the clear attraction was Donnie Baker.
He's a recurring character on Bob & Tom. I had a chance to meet him before the show. 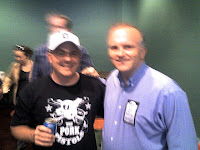 He's just a regular guy who works on a radio show, but when he hits the stage, he takes on a whole new persona.
The big news, though, is the rare guys' night out. I used to work nights at a TV station, and I would sometimes go out in groups after the news on Fridays. I think this is the first time in at least four years that I had gone out in town without my wife. Does that sound pathetic?
This photo, courtesy our pals at 99X, shows Charlie and me along with Nick Griffin, Chick McGee, Greg Hahn, Donnie Baker, Patty Vasquez and Ralph Harris. Sphere: Related Content