One of my favorite young former co-workers got married this weekend. We first met the groom when he was a wide-eyed intern from the University of Oklahoma. His easy-going manner and fascination with what we were doing made him easy to like. It was an honor to be invited to the wedding. 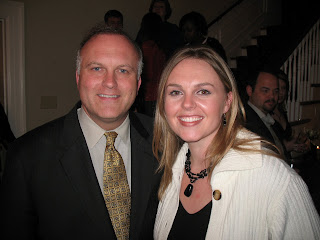 A great benefit was a reunion with our lovely young friend who has moved to Minnesota. She left her husband behind. He was forced to work, plus there was a big pond hockey tournament during which hearty souls (fools?) skated out onto frozen lakes in temperatures well below zero. She was happy to be back in the south, even temporarily. But, I digress. 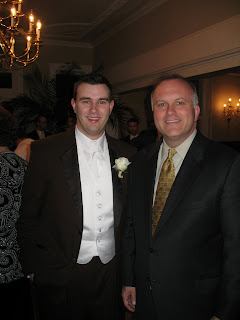 The groom's father, a Baptist minister, performed the ceremony. He told personal stories about his son and the bride, which gave the ceremony a nice flair. A veteran at the altar, the father of the Groom was nonetheless understandably nervous. He told a story about a fishing trip during which his son got a hook stuck in a tree. He was determined to free his line. He kept at it, pulling at the line until the hooks sprang free. They whistled toward the young guy and embedded in his neck. They had to go to an emergency room to have the hooks cut out.
The preacher-dad used this as a metaphor for marriage, saying "Son, that's the way it is. Sometimes you have to know when to jerk; and you have to know when not to jerk."
You can always count on dad to bring it back to basics. Have a long and happy marriage, little intern.