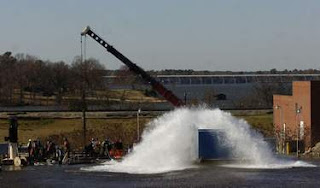 Some kind of massive system failure at the city's water processing plant has left us high and dry. This photo, by Greg Pearson of the Shreveport Times, shows what's happening out there where our water is supposed to be purified. That big fountain is not supposed to be there. According to local media accounts, divers are in the water trying to solve the problem, whatever it is. The job apparently is much larger than anticipated and this thing is really stretching out.
Many people are being sent home from work and school in order to conserve water, but it occurs to me that it's like rearranging deck chairs on the Titanic. People still need to flush wherever they are. Also, it's less likely that people will try to shower at work or school. But, hey, nobody asked me.
I guess there's something to be said for accumulating your family's human waste exclusively instead of having to merge it with that of countless strangers. That's what it all comes down to, as indelicate as it may seem. Water pressure is so low that most people in the city can't flush. Since this problem was not anticipated, most folks don't have enough water on hand to accomplish the Emptying of the Bowl.
If this drags on, there will be some interesting decisions to be made. How about this little ditty: "If it's yellow, let it mellow. If it's brown, flush it down." I don't know where I learned that, but unfortunately it bubbled to the forefront of my consciousness shortly after lunch. We have about a case and a half of 20-oz bottles of drinking water at the house. I wonder how many it would take to accomplish one good flush. There are some two-liter bottles of soft drinks around. They may be sacrificed to the cause later today. Certainly, we don't want to consume them recreationally. That would just add to the problem.
In the meantime, I'm left with the realization that there's a certain psychobiological pressure that comes wtih knowing there's no functioning toilet available. Chamber pot, anyone? 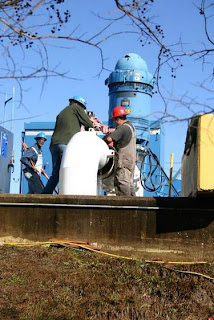 --------------
Crews fixed the problem shortly after 2:00pm, about six hours after it was initially detected. Massive quantities of bottled water were sold across the city today. It was a nice wake-up call on many levels. Plus, the kids got out of school an hour early.
---------------
The problem was so significant that a boil order was issued. Even though service and pressure have been restored, there will be no school tomorrow. The problem only existed inside the city limits, but the school board has given the entire parish the day off from their studies. Some kids get snow days. Our kids get no-flush days. You take what you can get, I suppose.
----------------
Thanks to John Andrew Prime of the Shreveport Times for the photo of the workmen repairing a valve.