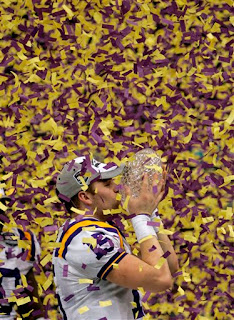 LSU's football season has come to a most satisfying conclusion. The Tigers are, by accomplishment and consensus, the National Champions of college football. With 12 wins and two triple-overtime losses, they have the best record in the land among the sport's major conferences. Hawaii was 12-1, but the one loss was so egregious and ill-timed that it rendered them superfluous.
LSU's dominating victory over an overmatched Ohio State squad in the title game earned the program its third national title and its second in five years. Can it be a coincidence that each of those titles was punctuated with a season-ending win in New Orleans, just an hour east of the LSU campus? 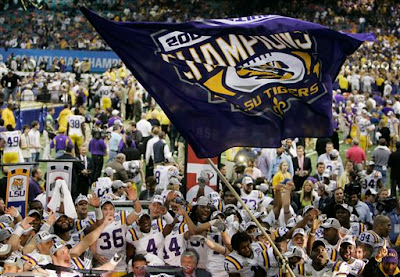 Tiger Faithful are delirious today, not to mention a little bit sleepy. Those who did not have a ticket to the game stayed up late and reveled in the victory. Productivity, no doubt, is taking a hit across the state. People have made it to work, but they are bleary-eyed and their conversations are dominated by last night's game in particular and the remrkable LSU season in general.
Less than two hours before the game started, I was in a supermarket. I made it my goal to see if, at any moment, I could look around and NOT see someone wearing LSU gear. The answer: for about seven seconds, I was alone in an aisle. That was it. I found myself wondering if LSU lost, would we see this much purple and gold on Tuesday? Alas, we will never know. Today, people are awash in Tiger colors, many sartorial statements accentuated by newly-minted proclamations of conquest. Local sporting goods strores stayed open all night to sell national championship attire. By many accounts, they were overrun by jazzed up Bengal devotees. 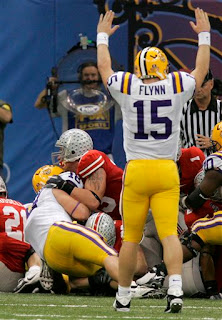 I had deluded myself into being content about staying home for the game. For the past several days, I've had countless people express their surprise that I had no plans to attend. The truth is, I didn't have a ticket and wasn't willing to pay the price necessary to get one. Also, I was there five years ago when LSU beat Oklahoma in the same building to earn a national title. I had a "Been there, done that" riff going. As the game wore on last night, I finally had to admit to myself that I was kind of sick at my stomach for not trying a little harder to get there.
Given the circumstances with which I was faced, I made the best of things. While my daughter was at a party and my son was working at The Chicken Place during the first half, my wife and I sat together in the living room with the HD, the TiVo and the surround sound and didn't miss a thing. I prefer it that way. During games about which I care, I do not wish to be distracted by conversation. The occasional phone call or text message from friends served me well. 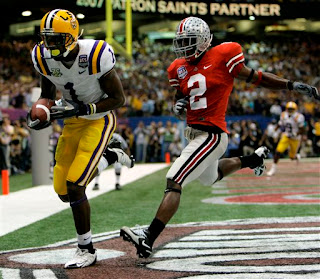 My son texted less than an hour before kickoff to marvel at the amount of business The Chicken Place was doing, particularly with people ordering mass quantities of chicken. He came home at halftime, his shift complete, and said that after 7:00pm they had exactly two customers.

The day did take on a holiday feel: a rush of activity, followed by a hush. The streets were Christmas day still for about four hours.
So, there is a sense of celebration today as people try to catch up on their rest while they're at work.
There are pockets of discontent. Some Louisiana Tech fans, in particular, feel as though they have LSU shoved down their throats. Setting that aside, with respect, for the time being, it is uplifting for our state to have something significant to celebrate together. Geaux Tigers.

These comments are in response to a post at http://linneafayard.blogspot.com
Funny. I know just how you feel. Isn't it strange? Five years ago, we were sitting side by side, watching it unfold before our eyes. Last night, just the sofa and the TV. I was hoping you would mention it today. Of course, I posted about it, too. You almost fell down that metal staircase at the dome thanks to your heels, but you looked fabulous doing it.
I also remember watching Marcus Spears' defensive touchdown with you from the concourse.
last night was much easier.


Linnea said...
Ha! Darrell, I forgot all about my near fatal accident on the stairs! You can put the girl in a sports job, but you can't make her give up her shoes.

Yeah, it was a strange experience watching the game from home and having flashbacks of the 2003 win. The coolest part of watching it at home was actually being able to see the end of the game. At both the BCS game and then at the Super Bowl a month later, I had to miss the last quarter of the games to do live shots. We watched how everything played out in the sat truck.

Plus, of course, I didn't have to wait in line to go to the bathroom!