Now that the confetti has settled following the LSU football team’s inspiring run to a national championship, let’s reflect on the great debate about the nebulous nature of determining the best team in college football. 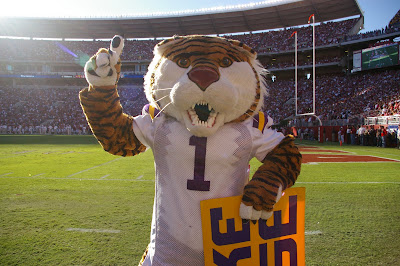 The Tigers are the undisputed #1 team in the nation except in Southern California or parts of Georgia and Kansas. Yet, the clamor for a playoff system is as loud as ever. In Louisiana, with the possible exception of a newspaper columnist or some talk show hosts, that talk is muted for now.
What sort of primeval urge do we have to need one champion to stand at the top of a mound of vanquished foes? Can you just see Mike the Tiger or Les Miles gazing smugly down upon a pile of Buckeyes, Volunteers, Bulldogs, Trojans and Jayhawks? 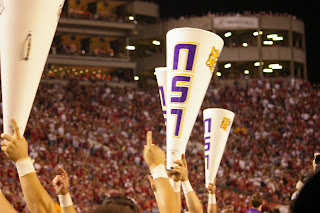 There’s chest-thumping braggadocio and a feeling of superiority as we revel in the knowledge that our football team is the best! In the meantime some Razorbacks and Wildcats, bowed but not beaten, stand off to the side snickering.
It’s nice to see your champions hoist a trophy and to have a flag flying above the stadium touting triumph, but what’s so bad about other teams enjoying a little success, too? Hawaii was the Western Athletic Conference champion. The Warriors, suddenly aptly named, did not lose a game during the regular season. They came to the mainland and faced a phalanx of bare-fanged Bulldogs from the University of Georgia and left with their spears sheathed in shame. Does that make them any less a champion?
Virginia Tech won the Atlantic Coast Conference, but lost in a bowl game to Kansas. That didn’t determine anything, really, except that Kansas may have a more solid case for final-rankings injustice than do USC and Georgia. When it comes right down to it, there is only one post-season college football game that counts, and it’s not really a bowl game. It’s the BCS championship game. All the other games, whether they involve conference champions or teams from the middle of the pack, are just exhibitions. Kansas-Virginia Tech had no more significance than Alabama-Colorado. There’s nothing to brag about. Hey, we’re number four! 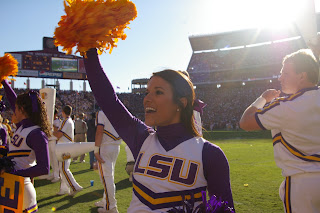 Boasting is really what it’s all about. Somehow, we stand a little straighter when we have something to celebrate. In Louisiana, this is particularly meaningful. We’ve been battered bloody for generations about our roads, education system, corrupt politicians and backwater ways. To point out with pride that “we” have been able to build something that is the best, even if it is “just” a football team, legitimizes us significantly. The LSU football team didn’t become the best with brawn and brute force alone. 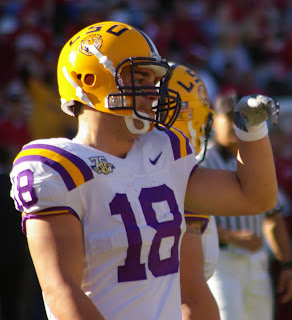 Its championship is a product of superior planning and organization. People “we” brought into the state, Les Miles, Gary Crowton, Bo Pellini, and Matt Flynn among them, worked alongside Louisiana people like Jacob Hester to build something special and successful. It shows we can cooperate to outwork and out-think the competition. If we can do it in football, why can’t we do it in education, cyberspace, healthcare, business and transportation? A national championship, earning the distinction of being THE BEST, gets us at our core. That’s primeval, indeed; but it’s also promising. Geaux Tigers.

I need to return to the Motherland sometime in the near future so I can wear some of my LSU gear around. I tend to get dirty looks if I so much as go to the gas station with it on in Indy.

To get to a point in your post - one has to wonder now that the BCS has dragged the bowl games out over so many weeks, why can't the BCS have a playoff system in place?