Of Mice and Memes

Daddy D may have earned Blogger stripe or two, but he is still a middle-aged man with a wife, a couple of jobs and teenagers who occasionally drop by the house to be fed or scolded. I guess that's how the Lolcats phenomenon passed us by.
A cat and a dog live in our house, as well. 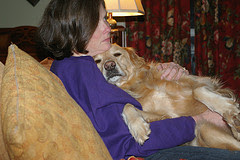 They consistently do things which amuse us, but we have been blissfully assuming that no one else would find them funny. There's a lot of pressure to be witty out there on the internets, and from what I've been able to determine with a superficial examination of the Lolcats meme, it just gets funnier by the day.
So, I entered the fray.

(The picture bleeds of the right of the page, which proves I don't really know what I'm doing. Click on the photo itself to be taken directly to the submission.) I'm not proud of it, because it could be much better. But, I had a funny picture of the cat and I slapped a caption on it then submitted it for Lolcat scrutiny. The idea is that the idiot cats have their own kind of broken language which seems to be German-influenced.
I would rather have entered with a bang instead of a whimper, but the comedy writers are on strike! Clearly, there is no danger that I will be asked to cross the picket lines and risk the sweet sting of witty barbs being hurled my way by truly entertaining people.
Now, I need to learn Lolcat language. If my first and only submission can merely make it to the voting page, I will be happy. It's like making it to the playoffs and hoping to advance past the first round. In the meantime, I'll keep scratching away, keeping the mice at bay.

Congrats to you, oh LSU fan, on the victory of your beloved Tigers.

Thanks. I took a moment during lunch to post a little something about the game.