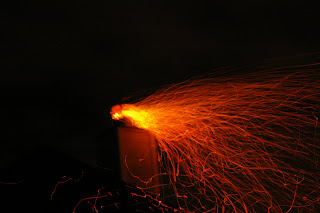 Shortly after 11pm on this otherwise uneventful Friday night, our teenage son moseyed into our bedroom and said, "Something's going on next door. It might be dangerous."
Five fire trucks and two police cars later, he might be right. Legitimizing his paternity, his first thought was not to call 9-1-1, but to grab the camera. The neighbor's chimney was on fire! Everybody is okay, and things were exciting for a while. Thankfully, the firefighters were thorough. The wind blew sparks and embers directly toward our house, and the firemen checked our roof for trouble. 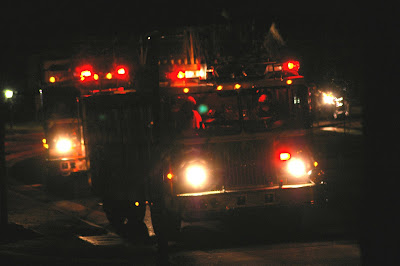 I hope the guy had a fire going in the fireplace, otherwise the chimney fire would be especially alarming.
There is a sobering cautionary tale here. The house is of recent construction, less than fifteen years old. We don't really know what happened, but we're feeling superior for having a chimney sweep come out earlier this year. Fireplaces in this part of the country are amenities, far from necessities; and we need to be attentive when using them. I'm not sure we would know it if our chimney caught fire.
SFD responded in force and that's encouraging. 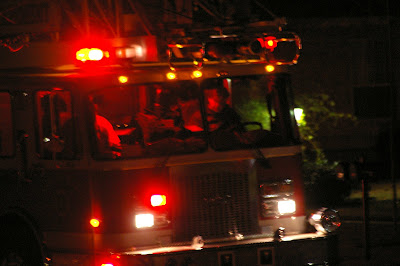 The neighbrohood smells smoky tonight, but the fire is out. I'm not sure what's going on next door, but it might be dangerous. That's for sure.