Smiling All The Way

Darrell and Mike (47)
Originally uploaded by Darrell
I have made it home from Auburn, and boy what a great weekend!
Let's start with the obvious: LSU overcame a 14-3 second half deficit to win at Auburn for the first time in a decade. They scored the winning touchdown with just about one minute left in the game to win 26-21. I was standing on the end line when Brandon LaFell caught the winning pass from Jarrett Lee. 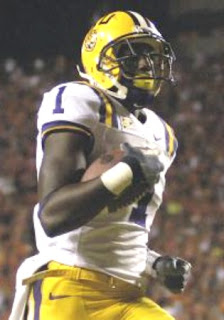 LaFell ran directly toward me as the impressive throng of LSU faithful at Jordan-Hare Stadium exploded with glee. The trip would have been great no matter what, but certainly it was better because the game was thrilling. The fact that LSU won was gravy. Both teams were ranked in the top 10 in the nation.
The traveling companions and I left home Friday evening and watched high school football, then headed eastward into the night.
We were out of town for 48 hours. 17 of those hours were spent in the car. About 8 of them were spent watching football.

The other guys all were working, so they had to write and produce stories for their media employers. Consequently, a good chunk of their time was spent under significant deadline pressure. I pitched in where I could in a good faith attempt to justify my attendance, but I had essentially no stress.

There was a little pressure to be witty. That comes with the territory when you hang with this crew. I don't have may opportunities to do "guy trips," and this one seemed to go really well. 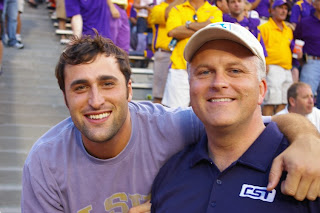 The weather was spectacular and the football was even better. The company was consistently entertaining. You can't ask for much more than that. Sphere: Related Content