Redskins Run Over Cowboys
Originally uploaded by Darrell
I've been having some fun with my camera, mixing my hobby with my former profession. I've earned a little legitimacy, it seems. This photo was published on the front page of the local newspaper's sports section this morning, accompanying a story crafted by my friend Roy Lang III, the sportswriter. They even gave me credit.
It's good that the image is in focus.
On the heels of a trip to Auburn for an LSU game, the opportunity to be back on the sidelines at Texas Stadium was simply a thrill. When I broke into broadcasting (in the 70's, my God), I had the great fortune to routinely cover the Cowboys. It was one of those circumstances that led a young man to give no consideration whatsoever to the paltriness of his paycheck. The rewards were so great that as long as the rent got paid, nothing else mattered much. Trips to Texas Stadium dwindled and ultimately stopped, much to my disappointment. I had not been on that field in years.
The Cowboys are moving into a new facility in 2009, and I told my wife over the summer that I felt a desire to get to Irving for one more game in the stadium. I had no notion that it would happen for me with such style. Roy was assigned to cover the Cowboys-Redskins game. When he called and asked if I would be willing to tag along and shoot some photos for him, I practically jumped through the phone saying yes. 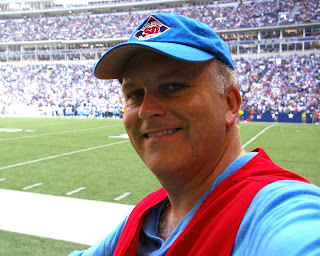 Walking down the tunnel past the visitors' locker room toward the field, I was transported back in time. As my senses came alive, I was awash in nostalgia. I had been there many times before, but as a much younger version of me. I had a still camera instead of a TV camera, but the setting was the same. I didn't close my eyes, but instead opened them a little wider. For a moment, I had a full head of hair, was 25 pounds lighter and there was a little dream of being a big-time sportscaster.
The moment of self indulgence passed and it was time to work on a freelance photo assignment. 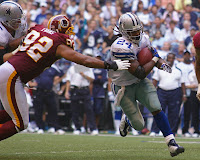 I just needed one decent image to justify my sideline pass and I think I got it. The work was comfortably familiar. 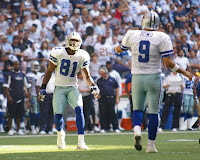 I was shooting images of Romo and T.O. instead of Roger and Drew, but the uniforms looked the same.
The only real difference I felt was how I reacted to the cheerleaders. On the sidelines, you stand within inches of them and occasionally pass a word or two. When I was doing this with regularity, I was typically dreaming of making those conversations more substantive. 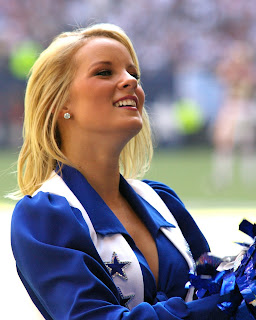 I still noticed them and acknowledged that they are beautiful women, but my brain registered, "some guy's daughter." I realize they might have looked at me and if they thought anything at all, it was "harmless old man." There's some comfort in that.
I walked away from a career in sports broadcasting five years ago because it aggravated me more than excited me. It was great, at least for an afternoon, to be reminded what it was I loved so long ago. 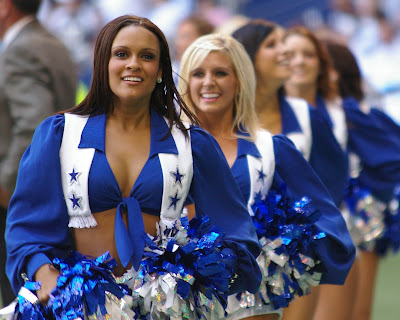 Thanks to Roy and Scott and everybody at the paper! 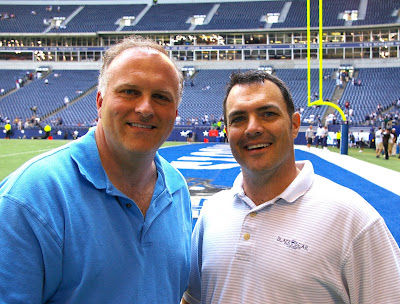 Nice thing about this visit was that you weren't lugging around a Thomson with 3/4 Deck... oh wait a minute...that's what Easterwood was for!

As I remember you used to chat about a Cheerleader who had twin pony-tails and even had her autographed pic in your office as I recall from "back in the day!"

Geez the 80's seem soooo long ago now don't they?