A Colossal Waste of Time

To add insult to injury: my son literally bumped into Bruce Willis. There's another movie filming in town. Willis is the star. They are shooting on campus and my son actually crossed paths with the megastar...and bumped into him. There was an exchange of "Sorry, man." "No problem."
To rub salt into the wound: my friend Tim got a speaking role in the movie that wasted my day. The stars are not lining up for me an any sense here.----------------------

Joe and Darrell movie stars
Originally uploaded by Darrell
My movie career appears to be over after just one day. I spent twelve hours in the company of some fine, talented people. That's twelve hours of my life I'll never get back. My old buddy Joe here was called for the same film, so at least I had somebody to hang out with. I actually knew about five people there, which was good since all we did was sit on our rear ends all day and into the night.
We were to be professors in a dinner party scene. We dutifully reported at 7:30am, went through paperwork and wardrobe selection and the started our sit-a-thon.
There were some women there, too. They primped and made a fuss about make-up & hair. Then they sat there, much of the day in an outdoor tent where their well-styled hair went flat and their make-up couldn't hold back the sweat.
We did get to the place where The Big Scene was being filmed, but only about eight people from the herd of "background artists" actually got to go onto (or even see) the set. The rest of us, about forty people, sat and sat and sat in a "holding area." We never saw a movie star or a director.
They did feed us well: steak, shrimp, a chicken option, nice salad and sides, excellent dessert slection. So, there's that.
I got a $25.00 bonus because I drove my car on one outdoor scene. 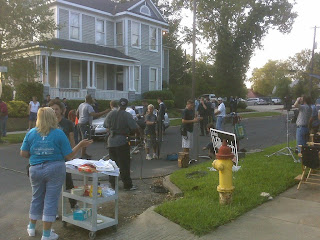 The film's star, Edward Norton, was driving a car that I had to pass. The assistant director or somebody told me my timing was excellent. I hope that counts for something.
After my moment as a stunt driver, I stood around and watched them film the next shot in the sequence, which involved moving the camera on a track. That was interesting to see, I suppose. The one star I caught a glimpse of was the one I sort of hadn't heard of when I got asked to work on the movie. Somewhere, Susan Sarandon and Richard Dreyfuss were lurking. I think I might have been in the same building with them. I think they were in the dinner scene I never got called for.
At the end of the day, I had earned the car bonus plus four hours' overtime. It wasn't worth the disappointment and frustration. There are at least 30 people I hung around with who seem to feel exactly the same way. Sphere: Related Content

Welcome to the world of the "background artist." (Don't ever call them "extras" or "props that eat.")

I was an extra in a bunch of movies and TV shows during my slacker era in the 1990s.

I think you're looking at the experience all wrong. This is easy money. Probably the easiest money you'll ever make. If you bring enough reading material and are willing to spend time talking to people who think sitting in the back of a room and eating a chicken wing makes them "actors," then you can have a grand time.

I had a blast doing extra work. The way I saw it, I was a low skill worker, and this was much easier than digging a ditch.

And once I saw the male lead of "Profiler" have a complete diva fit during the scene we were shooting. So sometimes you get good stories.

But you also learned a valueable lesson. Making TV shows and movies is pretty tedious work. Kind of like factory work, but with better food. When you see all the mikes and cameras pointed at the actors, it's amazing the performances are as good as they are.

Background, Extra, Cattle... you get the idea. I've done a few "Featured Extra" bits and got a little more scratch for my "acting". I got to play a "Dennis Quaid Look-a-like" in the mega-flop: "Major Movie Star".
It premiered during Christmas at a couple select theaters in Dallas. I read where 38 people paid to see it. With that knowledge, I can truthfully say that my compensation for about 15 hours was a bit more than the opening premiere box office ticket sales of that flick!!

Back in my "Hollywood Daze" in the latter part of the 1980's, I was a working actor! Got to play cops, agents, paramedics, reporters, anything in uniform. Most I made for so little was for a CBS Pilot called "Dr.s Wilde" starring Timothy Bottoms, some actress who I can't remember and Hang S. Nor ( Killing Fields ).
I played a cop and I was in costume and makeup for day 1...my scene didn't get shot some 11 hours wasted. Day 2, calltime 6AM...breakfast call... lunchtime comes... I get bored and help location cops direct traffic ( seriously ) dinnerbreak comes..still haven't shot scene. About 10:30pm... finally get placed and shoot take after take after take ( crowd / riot scene )... I get to yell my line:
"HOLD IT...EVERYBODY BACK!!" again and again and again... I forget how many takes...after the fifth time..I was thinking this was a bad joke. Where's the "candid camera"?

Finally we wrap... I sign my SAG voucher... I get a beaucoup check for double-time, double-double time.."Golden Time" as we called it. A little over $1600 for two very...very..looong-assed days. ( Thank gawd for SAG contracts!!)

But I have to say ..the best part was having G.W. Bailey (featured actor and current co-star of "The Closer") drop by my section of the trailer with a Playmate Ice Chest full of beer and shared some stories. Turns out his mama is / was from Shreveport. That was priceless!

Glad you had a chance to get on location. Sorry about the wait factor..dat's shew bidness!!