Wal-Mart goof offs
Originally uploaded by Darrell
I have a buddy who insists I'm living a "charmed life" for a variety of reasons, among them my occasional access to a big-time football game. There's no question that I am privileged to find my way onto the field despite my departure from full-time pursuit of a career in sports media.
Charmed, though? Let's get real. Someone living a charmed life is not forced to hang around a Wal-Mart in Monroe, Louisiana for thirty minutes while the clock strikes midnight. That's exactly where I found myself when my traveling companions deemed it essential to buy a sackful of snacks for the all-night trip to Auburn.
The only thing to do, it seemed, was laugh. We were surrounded by the exhausted, the drunk and the infirm as we rounded up beef jerky, Nutter Butter and M&M's. One poor guy, who had quite obviously just finished a shift at a job he merely tolerates, was trying to buy a fifth of Captain Morgan and a generous supply of mixers. We slid right behind him at the checkout line at about 11:45. The clerk was so inept and flustered by her professional challenges that we did not get to the register until about 12:10. That's when she told our beleaguered companion that liquor sales are not allowed after midnght. The fact that he got in line before midnight was of no consequence to her whatsoever. Rules are rules, so Captain Morgan sailed back to the aisle and our new friend slinked off into the oppressive amber light of the Wal-Mart parking lot. When last seen, he was forlornly swatting away a cloud of mosquitoes as he went off in search of a way to wash away the memory of his emotionally exhausting day. 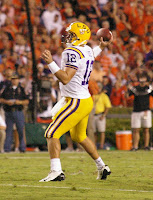 The football was high level, but the meals were far from it. The highlight was the "continental breakfast" at a Hampton Inn somewhere in Mississippi. Wendy's and Taco Bell were staples on the trip. There's nothing wrong with that. It's fun in its own way, but charmed?
Three grown men shared a room with two beds for two nights. That meant somebody got a chair or a floor. At least there were choices.
"Charmed" would be a room to himself for each guy and a flight instead of a nine-hour drive.
I'm not complaining. I'd do it again this weekend or the next.
I think the Wal-Mart experience scarred us, though. Tim, who put the trip together, blogged about it too. Click there to get a different outlook on our "charmed" trip.

The Auburn football experience rivals LSU's. Their "War Eagle" is as impressive a live mascot as Mike the Tiger. The tailgate experience is on par with Baton Rouge in geographic footprint as well as duration. And yes, Jordan-Hare Stadium is big and the crowd is ear-splitting at times.

I'm glad I went and I thank Tim for inviting me. Maybe he's my charm.