(I told my wife that I needed this "be still" weekend. Maybe I did, but reading these posts, I realize I just sat around like a lump watching TV. I did go to church. I need to get out more. You can tell it's football season.)-----------------------------------------------------
As a sports fan and a former TV sportscaster, I found myself surprised and happy while passively watching television Sunday night. Dan Patrick and Keith Olbermann, who brought "SportsCenter" into the big leagues, were back together on TV. 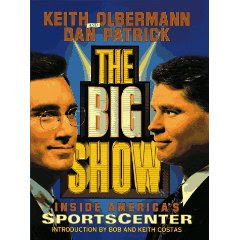 When ESPN was still just a little cable outfit struggling for viewers, they co-anchored SportsCenter and informally dubbed their news and highlights presentation "The Big Show." Their on-air rapport and obvious friendship allowed them to develop a collective humor and complementary styles. They brought viewers along with them for the ride and became household names among sports fans.
Olbermann moved on and has made cameo appearences on TV and radio sports presentations but has carved out a niche on cable TV news as a bombastic news-talk host who is harshly and often angrily critical of the Bush administration. I'm not a big fan of News Keith, but Sports Keith is immensely entertaining.
Patrick was an early cable sports pioneer, anchoring a sports news program on CNN during the formative years before moving to ESPN, where he eventually settled into a successful daily sports talk radio show. He recently left the ESPN empire to strike out on his own with a daily radio show. He also writes for Sports Illustrated.
NBC reunited them on "Football Night in America," where they co-hosted an NFL highlights segment. I didn't know it was coming and I stopped what I was doing to watch it. Bob Costas introduced the segment as "The Little Big Show," which is actually pretty clever. 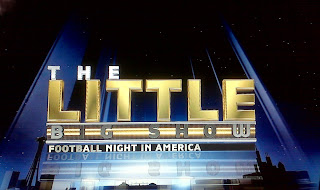 They fell right in with their old banter and humor. Heaven help me, I was entertained. I watched the whole thing and just laughed. It was great. I hope it's a permanent fixture. 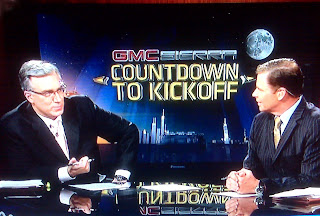 Cris Collinsworth, sitting beside Costas, said something like, "Keith goes to school all week and this is recess." It was clear Olbermann was having a great time. Patrick seemed to be swimming in it.

It's a week for reunions. On a much saller scale, I did a segment on the radio with my old broadcast partner, Tim Fletcher. We were promoting the game we called together last week along with our former co-worker Clif Cotton. I said on the air that since I left the media, I'm usually working around people who are more highly educated and much smarter than me. I said, "I know a rising tide lifts all boats, but I'm just flopping around in the wake." Fletcher said, "Well, welcome back to the shallow end."
Maybe Olbermann would be happier in waist-deep water himself.