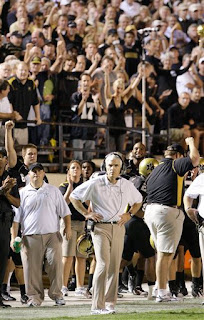 There is excitement in our house because the football team from the wife's alma mater is 2-0! Vanderbilt beat South Carolina Thursday night, raising hopes of bowl games. The last time the Commodores went to a post season game, my wife was a student at the school. That's been a while. Coach Bobby Johnson is doing a remarkable job at the Southeastern Conference's traditional doormat. The home victory over a nationally-ranked team was just huge. Four more wins to go bowling, baby! Any Vanderbilt fan (if you can find one) will tell you that the football team will tantalize you with a hanful of wins and then just crush you...usually with an embarrassing loss to Tennessee. For now, though, the Commodores are celebrating. My wife even went on-line to buy some Vandy gear. 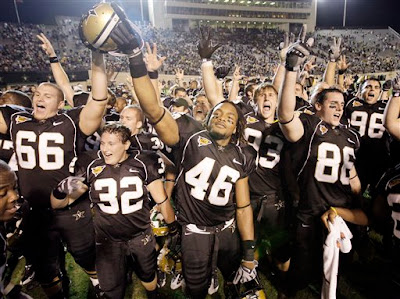 One of the benefits for a coach of playing a Thursday TV game is the opportunity to go recruit in person on a Friday night. So, who did I see on the sideline of a game in Shreveport?

It's Bobby Johnson, pressing hard on two players at Evangel Academy.
I sent this photo to my wife on her BlackBerry, and she immediately texted back asking me to congratulate Coach on his great victory. I told him she was in school the last time Vandy went bowling. I said, "I know you want Sugar, but she'd be happy with Independence." He laughed and said he'd see what he can do. That's all you can really ask for.