Washington Lights Up the Night

(Kennewick, WA) - Seattle is famous for being sleepless. The Tom Hanks movie assured it and of course inspired that hack cliche. Then, there's the caffeine. Seattle was where Starbucks started. Being a tourist, I naturally visited the original location. It's a major American city, so there's always something to do. Who needs sleep, right?
Fortunately, here in the Tri-Cities, about three hours inland, my traveling companions and I are not enduring such distractions. There's plenty of rest to be had on the banks of the mighty Columbia River. Our location on Clover Island is gently illuminated by the Tri-Cities cable bridge, which has become a landmark for the region. 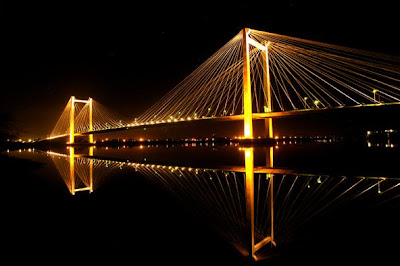 It's an engineering marvel and a source of political controversy not unlike Shreveport's Texas Street Bridge. Both spans are lighted at night. At their inceptions, each project delighted some and angered others. The Tri-Cities lighting effort was completed in 1998 and by 2000 the lights were turned off to conserve energy. A compromise has been reached and now the bridge stays illuminated until 2:00am. The Texas Street Bridge had neon lights installed in the early 1990's. Some people thought it was mindless folly, but the bridge is widely photographed and is a landmark in its own right. 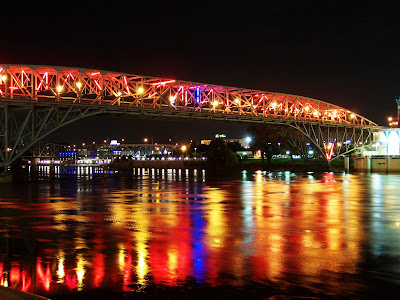 The fact that I researched the history of the Washington bridge should tell you a little something about the pace here, but that's not important. This is a business trip and business is being conducted.
Tomorrow, we travel halfway across the continent east and south. Come to think of it, that's a long way to go. Maybe I'll get a little sleep. Kennewick is a great place to do it. Will Somebody please turn off the doggone lights? 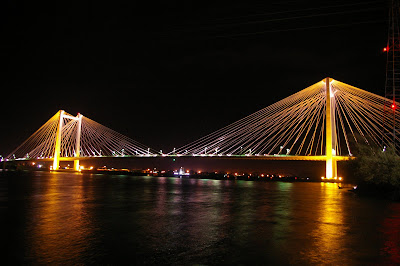 Nice pic of S'port's Neon Bridge. Too bad it hasn't looked that good in years since not all the neon is working. And they haven't replaced the vertical spotlights on both ends. Remember the laser beam that was supposed to shoot down Texas at night? Seems it wasn't rated for freezing temps so the first few dips below 32 degrees...it choked and was never refitted or replaced!

Our bridge kind of looks like some oddity these days. Wonder why the neon doesn't get fixed up? Heard someone from the city public works say that the fat pigeons roosting on the neon is a major problem as when several birds roost, their combined weight cracks the terminals.

Seems like the engineering was left out of this "work of art". Sure would be nice if they fixed it up as it was intended to be.