A Take No Prisoners Dynasty

A sports dynasty has been built in southeast Shreveport. Think Dallas Cowboys, San Francisco 49’ers, Chicago Bulls, or New York Yankees and you get an idea of the dominance enjoyed by the bean bag baseball team from Live Oak Retirement Community. Live Oak rules the bags and team members have the hardware to prove it. Since bean bag baseball was introduced to the Northwest Louisiana Senior Olympics in 2005, no other squad has brought home the gold. 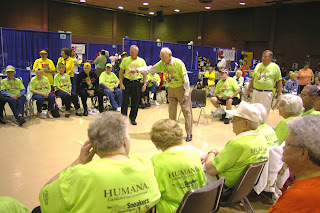 Live Oak’s emotional leader is 99-year-old W.J. Cooksey, who will proudly display his four gold medals any time he’s asked. His wife, 94-year old Louise, has three golds of her own. Sadly, she missed the 2008 competition because she was on injured reserve following some minor surgery.

She was in the crowd at the finals, though, cheering on her husband and her fellow residents. By the way, the Cookseys have been married for ten years, which tells you a little bit about loving life and going for the gold in more ways than one.
It’s no fluke that Live Oak is the only facility to have its name engraved on the plaque honoring all-time bean bag baseball champions. Taskmaster Henry Ward, the president of the residents’ association,

puts his squad through weekly paces, practicing the art of the bean bag toss in hallways, the chapel, the community center or wherever he can set up a field of play. Coach Ward has his team out there once a week, encouraging, cajoling and recruiting new players.
During the preliminaries in April, things got a little intense. Live Oak was facing a serious challenge from a competing facility’s team. A first-year player was taking his turn and some of his teammates got a little loud on him, calling his name and shouting “Take your time! Focus! Let’s go!” It was all great fun, mostly because they won. After all, it’s what’s expected. 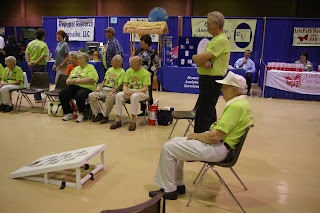 In this sport, the bases are chairs. There’s a board with holes cut into it, placed on the floor and propped up at about a 35 degree angle. The center hole is labeled “Home run.” There are holes for single, double, triple, foul and out. Each “batter” gets to toss bean bags toward the board. If the bag doesn’t go through one of the “hit holes,” that’s a strike, and so on. Three strikes and you’re out. Three outs ends your half of the inning. There’s a maximum of six runs per team per inning. The good news is, if you make it on base you get to sit down. It’s a chair, after all. Each game is played for seven innings. 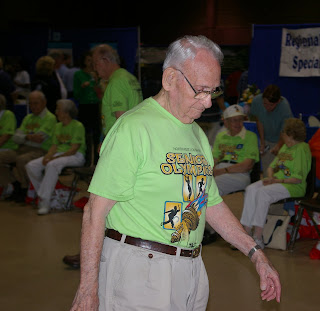 True to baseball tradition, many of the players have been given nicknames. “Home Run Harbin” earned his with an uncanny ability to toss the bag right to the middle of the board. His timely “hitting” sparked a remarkable two-out, six-run fourth inning rally in this year’s gold medal game. Talk about loud, when Harbin’s bean bag struck the board slightly above the homer hole and slid softly downward and through, the Live Oak bench erupted. Their worthy opponents were clearly crestfallen, knowing that their fates had taken a turn toward the silver medal. 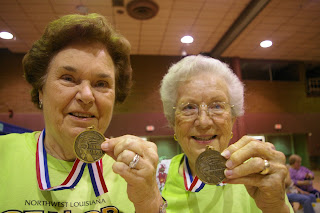 The team is already planning the defense of it unbroken string of titles. Looking ahead to 2009, there’s a personnel concern. Mr. Cooksey noticed it right away. The entry form has boxes to check to indicate a participant’s age range, and it only goes to 99. Maybe bureaucracy is the only way to slow down the Live Oak juggernaut. 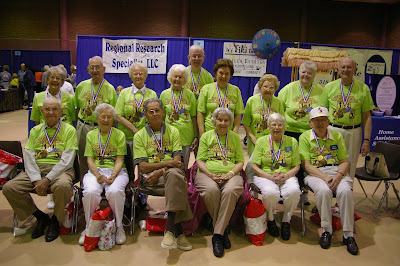 Darrell - Thanks for such an entertaining and positive story! My father-in-law lives at another local nursing center, but I doubt that their posse of spunky Bossier City seniors would want to tackle these Live Oak legends. But, if the name of the game is Bingo...Bring it on!!!