Chillin' in Tulsa
Originally uploaded by Darrell
My wife went with me to Oklahoma. Despite a lifetime of living just a state or so away, it's the first time she had ever crossed the Red River north of Texas. We found Tulsa sunny and cool, jacket-worthy, even. It's really a nice city. They are sprucing up downtown in a big way, apparently using a state of the art arena as a centerpiece for revitalization.

The place is an architectural marvel which appears to be well on its way to opening soon.
The trip was kind of nice. The wildflowers in East Texas were spectacular. Eastern Oklahoma is hillier than we thought it would be. A couple of hours on the Indian Nation Turnpike allowed us to see some nice scenery.
The food? Nothing to speak of. Dairy Queen in Hughes Springs, TX and McDonald's somewhere on the turnpike. Then, there was a hot dog downtown. Maybe we will have a nice lunch on Sunday.
I will say that downtown Hughes Springs is lovely this time of year. 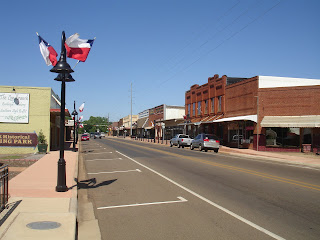 And, Oh by the way...the Arena Football team for which I do radio lost. That's three defeats offsetting three wins so far. Next week, It's off to the Pacific Northwest.
I've grown accustomed to traveling alone, but I've got to admit it's nice to have my balancing half with me. Sphere: Related Content

Hughes Springs? I had forgotten that place existed, but now I remember a freaky story about a woman who faked her own pregnancy and then tried to kill the mother of a newborn. Eech.

And I've eaten at the McDonalds on the turnpike. Almost as traumatic as the pregnancy story.

And I've been to Tulsa (my sister lives there). Less traumatic than the McDonalds.

And I live in the Pacific Northwest... yet far away from any arena football.

That's all the connections I can think of now.

Did a story on a Country Poet named Jesse who owned a grocery store in Hughes Springs back in 1982. I'm sure he has long since gone on to serving his yarns and big sammiches in the great beyond by now as he was probably pushing 80 when I met him back then.

Lotsa little burgs & hamlets in the backcountry of the ArkLaTex.

We had lunch in Mt. Pleasant at arestaurant called "Two Senoritas.
Why it wasn't called "Dos Senoritas," I don't know. But, the food was good.
The most confusing highway configuration I've ever seen was just outside of Paris, Texas.
Vive la confusion!

Probably called "Two Senoritas" because some may have confused Dos with "Do's".... (I know...I know...even in this day and age of multi-culturalism awareness...)

For example: I am constantly amazed at some relatives on my wife's side of the family who refer to Trejos Mexican Restaurant as "Tray-Joes"...and they're not even trying to be funny.