There Was an Incident at Security

(George Bush Intercontinental Airport) - The Houston to Shreveport leg of the trip has been delayed, so here's a quick story from SeaTac:
My wife and I have a little little tradition. We get snow globes when we go somewhere. It's old fashioned, unabashedly Caucasian and dorky, but it's something we do.
I decided to surprise her with a snow globe from Seattle. We had been there together and negelcted to get one, so I took the mulligan. Go big or go home, they say, so I got a big snow globe and absent mindedly packed it into my carry-on.
I never saw it coming. The Wilfred Brimley looking TSA guy at the Seattle airport stopped the line when my bag went through the scanner. "Sir, the snow globe cannot be carried on."
"What? OH! Too much liquid?"
"Yes. You can surrender it here or go back and check your bag."
So, I was escorted by a uniformed federal agent back outside the lines, where I checked my bag. Then, I had to go back through the security process, where I sailed through on the second attempt. It took me an hour and fifteen minutes all together.
Now, I sit in Terminal B of the Houston airport, my flight delayed. I have spilled Diet Coke on my white shirt and I don't have a clean one....because I checked my only bag.
When my wife picks me up a couple of hours later than she had planned, she will see me...unshaven with a cap on and with a big brown stain on the front of my shirt.
I hope she likes the snow globe. 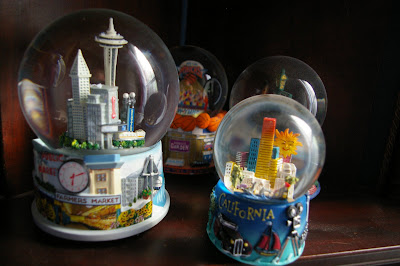 Update:
She did. The snowglobe now has a place alongside its new partners.