Fly-by Mountain
Originally uploaded by Darrell
I spent the weekend in the Pacific Northwest and was caught off guard by the amount of snow I saw. I knew I would be near the mountains and thought I would even travel over them once or twice, so some snowcaps weren't a surprise. The snow on the ground was, though. I even got to see some snow falling briefly on Sunday.
Many of my traveling companions shared similar observations. Back in Louisiana, the temperature rose into the 90's on Saturday.
It was great to see my friends Jerry and Lori. They live so far away, it's a rare treat to spend time together.

We ate ate the legendary Ivar's on the waterfront and the food was outstanding. I had salmon, which of course was fresh.

I did lots of tourist-type things, including watching the guys throw fish at the public market.

Jerry has an amazing hobby. He buys and restores stand-up video games and pinball machines. On the ground floor of his house, he has about forty fully functioning games, all on "free play." He has several projects ongoing. He had to have wiring to these rooms customized to handle the load of electricity. One can spend hours in his house and not want to leave. 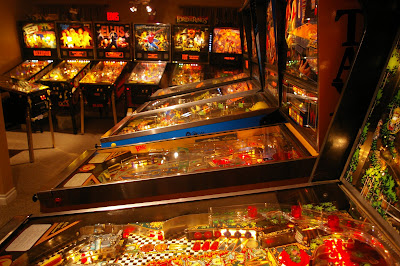 I don't know how he stumbled upon this hobby, but it's a lot of fun. I imagine it's also expensive.
Seattle may be losing its NBA team to Oklahoma City, but its NFL and MLB teams are well cared for. The stadiums are side-by side downtown, in the shadow of Mt. Rainer. 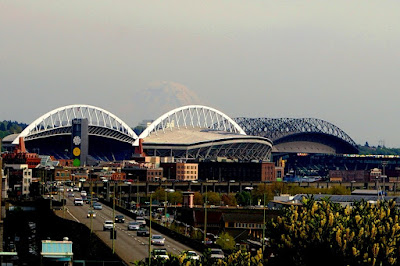 There's a whole lot to like about Seattle, which is why Jerry and Lori have chosen to live there despite having deep Texas roots. Jerry is imminently quotable and hysterically funny, but he's dead serious when he says, "I never want to be hot again."

-----
Here, I'm throwing in a photo I took at the market, because it's nice and a little "jump" is called for. After the photo, an off-color story. I apologize if it offends, but it's funny and I'll share it. You have been cautioned. 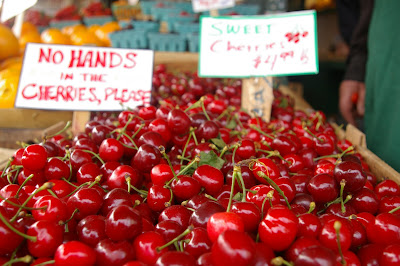 I was traveling with a group of young athletes. Naturally, some of them are large human beings. My seatmate on the first leg of the trip (on one of those preposterous regional jets) measures 6-4, 365. Get the picture? As we were landing in Houston, a baby on the plane began to wail...ear-piercing screams. Mom could not calm her down. The screaming paused just long enough for the child to take a breath and start fresh. At that moment, one of the big man's teammates called his name and said, "Hey, why don't you put one of your titties in its mouth?"
It was so cruelly funny and inappropriate that many people on the plane just could not help themslves. There was an eruption of laughter. Think what you will about what was said and the context of it all, but trust me when I say that moment is already a minor pro sports legend. Sphere: Related Content

My good friend from Washington says that is Mount Rainier. Mystery solved!