A Thrilling Night at the Arena 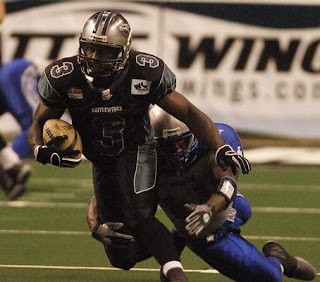 My Arena Football team* snapped a three-game losing streak in style, handing the reigning league champions their first loss of the season, 52-45. The other team had the ball in scoring position in the closing seconds, and our defense stopped a wide receiver on the four yard line as time expired. So, maybe the guys are actually pretty good and they've run up against some hard luck lately.
They did let a 21-point second half lead slip away and found themselves trailing by a point with one minute to go. They scored a touchdown and made a two-point conversion to set up the drama in the final moments.
My mother-in-law game attended the game. It was her first Arena Football game. (Of course, it was). But, she knows that this dominates our spring and summer weekends, so she wanted to see what all the fuss is about. She stayed until the end and was smiling from ear to ear. Hey, she was out of the house!
This was just the second victory for our guys in thirteen tries against the other team. That streak of futility dates back to 2001.
When the lead was at 21 points, I looked at my wife, pointed at her mother and said, "You know if we win, she has to come to every game."
In the euphoria immediately following the Big Defensive Stop, the general manager offered my mother-in-law a free season ticket right on the spot. For everyone's sake, I hope she accepts it and uses it.
-------------------------------------
*I do the radio play-by-play for this team. It's my 3rd season.
Thanks to Douglas Collier at the Shreveport Times for the game photo.