I woke up Sunday with a cold. On the first day of summer I had a runny nose, scratchy throat and watery eyes. It's hasn't gotten any better in the intervening two days. The strange thing is, on Thursday my friend Donna asked me, "Do you have a cold?" I said no. Four days later, I woke up sneezing. I was having lunch with her when she asked. Do you think maybe she slipped me some Eye of Newt or something? I'll get you, my pretty!------------
My wife is a lovely, classy woman. She was raised with the best manners befitting her breeding. I never ate watermelon cut up into squares until I met her, if you know what I'm saying. At one point on Sunday, she assumed driving duties on the way back from Oklahoma City despite being distracted by hunger. While I had gone off to the men's room, she was charged with buying snacks. 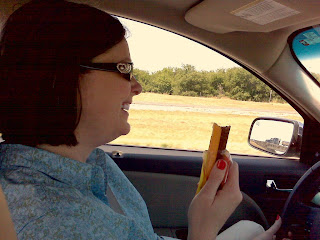 Settled comfortably ino the passenger's seat, I closed my eyes for a few minutes. Then, I looked over and almost gagged with laughter when I saw her eating a Slim Jim and cheddar cheese combo right out of the package.
Can pigs' feet, pickled sausage and a 40 ounce Natural Light be far behind? Maybe she's finally moving over to my side of the tracks.