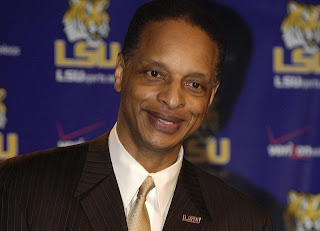 LSU has its new basketball coach, and all early impressions are they got this one right. Trent Johnson comes from Stanford, where as head coach he led his team to three NCAA Tournament appearances and another in the NIT in four years at the helm.
This demonstrates that he can have success in a big-time conference.
Before that, he steadily built a program at Nevada, a member of the same conference as Louisiana Tech. He used a 25-9 season and a 2004 Wolfpack run into the NCAA's Sweet 16 to catapult himself into the PAC-10. He has credentials.
It also helps that he is African-American. This should give him an advantage in Mama's living room that his predecessor John Brady could not enjoy.
I just wonder what led him to Baton Rouge. He was poised to get a big raise at Stanford, but chose to make a move into the Southeastern Conference instead.
Except for a stint as an assistant coach at Rice, Johnson hasn't lived or worked anywhere near the Deep South. As well all know, South Louisiana is its own unique subset of that, to boot. Throw is well-seasoned LSU fans, and I suspect Coach Johnson is in for quite a culture shock.
His transition will be easy if he can redirect the program which made it to the Final Four just three seasons ago. He said there's an excellent chance to turn things around quickly, adding in classic coachspeak "The opportunity to recruit the best student-athletes across the country and have the opportunity to compete for championship year in and year out: that is the goal."
If he achieves it, this will be a landmark hire for LSU. Maybe the basketball program will be fun again.

Is it just me or does he remind you of the filmmaker John Waters?