The Pope and the Bushes 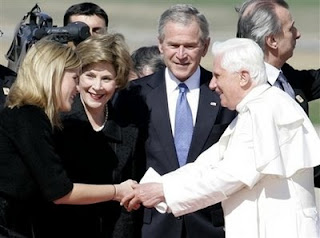 Maybe I can't set aside politics and religion. Maybe what I saw today was colored by those prysms; but this scene gave me a thrill. The President of the United States walked, with his wife and daughter, to the steps of an Alitalia airliner and greeted The Pope on United States soil. This has never happened before. This was an awesome moment and an historic photo opportunity. One hopes it leads to something profoundly more meaningful. The Holy Father is hoping to mend the hearts of disillusioned American Catholics. I'm one of them. I am among the millions who will be scrutinizing his words and actions while he is here.
Gosh, the President personally greeted the Pope at Andrews Air Force Base. Amazing.
The Little Catholic Boy tucked away in my memories is a little bit breathless.

Why are you disillusioned?

I'm not ignoring the question. I've been thinking about it all week, trying to decide how to answer it. It might be a separate post. I don't know. It's precarious territory for me.