There are many benefits associated with having a significant medical procedure performed at your place of employment. This is particularly true if you are widely liked and respected as is my wife. Most of the people caring for her are colleagues. Knowing all too well that she was enduring a painful process and realizing she was feeling a bit conspicuous, she was offered a treat. The ladies brought her a brownie. Presentation is everything, and this is what she got: 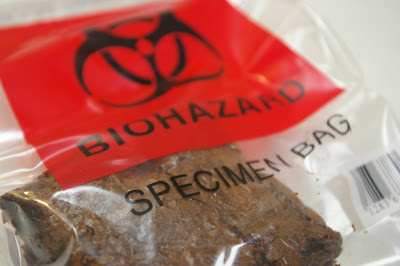 Everybody's a comedian, you know that? The best part is, when she got home she ate it!
She is home after the crew removed a 1cm malignant mass from her nose. We had taken a three-day pause to consider radiation therapy, but she was concerned about secondary tumors and other side effects. She is, as I have explained, a "get this behind me" person, so once radiation was ruled out things moved swiftly.
I know, "malignant mass" sounds pretty terrible, but if you're going to have skin cancer, have the kind she had. Basal cell carcinoma probably won't kill you, but it has the potential to make you look different. The doctors are confident, however, that her cosmetic and medical outcomes will be just fine.

She says "it hurts when I move my face." If you think about that, it hurts all the time. You move your face when you smile, frown, sneeze, eat, drink or make any expression. Upon hearing this, one of our TV pals suggested the best therapy would be watching a competing anchorman, because "his newscast is scientifically proven to illicit no emotional response whatsoever." Brutal, but funny. No laughing at a time like this!
I think my wife underanticipated the impact this would have on her. I think she'll bruise. She has a lovely incision closed by big black stitches. Those should be removed next week. Then, it's on the road to recovery.
Now, we are investing in giant vats of Nivea sunscreen, SPF 70. I highly recommend it.