How Not to Win Customers

Mural
Originally uploaded by Darrell
We had about 45 early-evening minutes to kill between appointments, so we decided to cruise up the road looking for appetizers and a Diet Coke.
We noticed a "Now Open" sign outside a familiar place with a new name and a brand new look. There was an open parking spot right in front, so we whipped in. What for a long time was Bear's is now Actors Cafe. It is a kind of Sardi's in miniature, I guess. The decor attempts to be reminiscent of Hollywood, and there's a nice mural on one wall featuring famous faces. 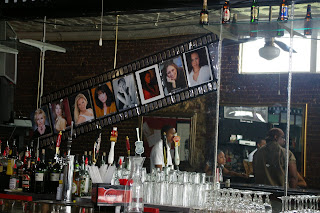 Photos of not-so-famous other pretty people are framed and line the walls.
We were the first (and only) paying customers there for the half-hour we stayed. The appetizers were fresh and tasty. The service was prompt and friendly. The waitress was pretty. The manager, a man named Caeser, was engaging.
So, I'm inclined to go back soon to give dinner a try. There was one circumstance that left me wondering, though. When we had been there about fifteen minutes, a man walked in. Caeser advised us he was the owner. His name, in a possessive way, is above the name of the establishment (Nightbyrd's Actors Cafe). There he was, the man with his name on the sign, with two middle-aged paying customers sitting in his restaurant.
He never spoke to us. He didn't make eye contact. He didn't ask us how the food was. When we left, we walked within three feet of him and he didn't invite us to come back.
I don't know what to make of that. I guess we don't look like actors. 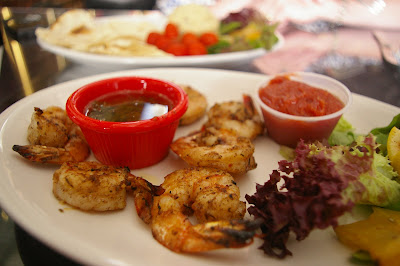 Nightbyrd also has an "actor's agency" and is now a nightclub/restauranteur who lives above the joint. He would hold meetings at Bears for local actor wanna-be's and folks looking to "network" the film-biz. The owner of Bear's had fallen on some tough times and had a couple folks rent his place and bail on him. Enter Jeffrey Nightbyrd who needed a venue to keep court. And so the "Actor's Cafe" was born. I suppose he'll start having Actor's Scene Showcase nights reminiscient of the L.A. actor's showcases where you pay $20 to $50 to perform a scene to be critiqued by "bonefide casting associates"...been there, done that too many times back in "the day".

Glad to hear that the food might be worth a try. But if it's going to be catering to "Local Actors"....it'll go bust (as they never have much money to spend). It'll need the corporate types and their wives who have the platinum plastic to sustain it.

Hey I'll bet the owner was wearing a Fedora or Panama Jack and Birkenstocks when you saw him. No?

P.S. Hey didn't you do an "acting gig" here recently? That would qualify you as being "bonefide" at least here in "The Other Side" of Louisiana...and worthy of Mr. Nightbyrd's attention. ; )

He was wearing a hat. Yes.
I didn't get to do the movie thing. My "day on film" was scheduled the same day as my father-in-law's funeral.
Maybe I will get a call back when there's another need for a "nondescript middle aged executive type."