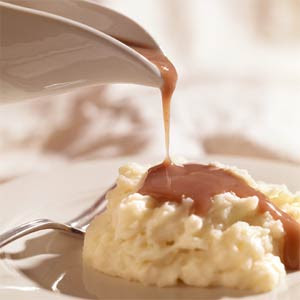 Legendary Shreveport Times columnist Teddy Allen knows a thing or two about gravy. He has written many a syllable, some of them thrown together essentially as prose, about the virtues of a good gravy. I've known Teddy a long, long time. I have even been honored by the pleasure of eating some of his mother's gravy. It was over rice with pork roast. It was in 1984. It was so good, I still remember it. I thank Teddy and his mother for it. I need more and soon.
Teddy recently wrote a piece about how you can't get good gravy on the streets and followed up on his blog, publishing an e-mail from a reader which read, in part:

I’ve been married for almost 30 years, and my wife has not made gravy in about 29 years and a few days now.

One of our first meals as a married couple included mashed potatoes and gravy.
I made a (first of many) mistake that day. I asked her which dish was the potatoes and which one was the gravy.

You see, I had never seen white gravy. As a youngster we did not get out much, and I had no idea that gravy could be anything but brown.

I’ve often tried to make a good brown gravy, but I can only get the brown part right and not the taste.

This got me thinking about gravy. I wrote to Teddy:

"I am right there, brother. I grew up on two kinds of gravy: natural and brown. I never heard of such a thing as white gravy.
I still kind of don't understand why you would put white gravy on mashed potatoes. Visually, you need the contrast.
White gravy, as far as I'm concerned, should be limited to biscuits. Even then, it's an acquired taste and an inferior product.
And...I still can't produce a decent natural gravy. The best brown gravy mix I've found is Tony Chachere's."

To my delight, he answered simply and eloquently:

"This is so beautiful...." while agreeing that contrast is the key. He pointed out that "people forget that."

He's right, of course, but how can that be? It's the institutionalization of gravy, that's how. Go to your average Dairy Queen and order a steak fingers basket. Your gravy will be white. That's just one painful example.
My own mother, God rest her soul, could cook a piece of meat all day just to get natural gravy out of it. As I recall (It's been a long, long time), the meat either wound up fork tender or leather tough. Either way, I didn't matter, because the gravy was thing thing that mattered the most.
I distinctly remember my father speaking derisively and disgustedly of a supper he had at another home. Everything was good, he said, except the meal was ruined by "sorry thick flour gravy." I had bad gravy just today at a downtown restaurant. It left a bad taste in my mouth in more ways than one.
So, say what you will about "eating healthy." Sometimes, you have to feed your soul as well as your body. For me and for Teddy, gravy gets the job done.