Just In From the West Coast

Three of the four of us have made it home from L.A. My daughter will hang around for a couple of more weeks. 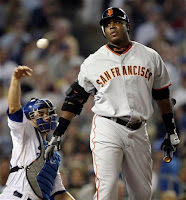 She's at Dodger Stadium, a night after the other members of her family sat with 53,000 or so others hoping to see Barry Bonds tie Hank Aaron's career home run record. He didn't do it when we were there.

It was my first trip to Dodger Stadium, and I'll just say the place lives up to its billing. Despite, or maybe because of its retro feel, it's a specatacular place to see a ball game.
The purpose of the trip was to look at California colleges. We had official visits to three, spent a lot of time at another and drove past one more.

It wasn't a fair fight. Nothing can compete with Pepperdine. 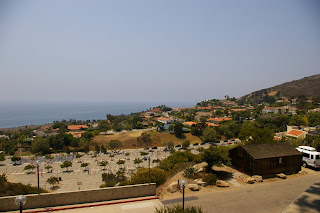 We don't know if our son will wind up there for college, but we all definitely need a little distance before we visit another campus. 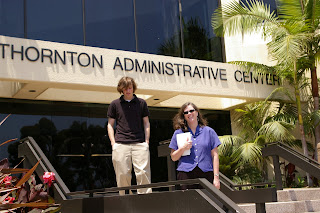 The return trip was noteworthy because of long lines at the gates and long delays at our respective hubs. My wife and son flew home through Atlanta. I came through Houston. We sat on the tarmac for two hours, delayed for weather considerations.
The flight was remarkable because the attendant and the pilot got into a squabble on the intercom. As we sat there, people wanted to get up and walk around. The attendant was instructing everyone to keep their seats because technically, we were in a taxi process. The pilot said to coordinate trips to the restroom through the attendant. She said she wasn't in a position to manage that. Ultimately, everyone got to go to the back of the plane as needed; but I found out after we landed that we were forced to stop anytime someone did. The pilot got scolded by someone in the control tower for holding up aircarft behind him in line.
Fortunately, the crew were laughing about it once they landed in Shreveport.
The trip was fast and furious, but fun and informative. It's good to be home, though. Nobody scolds me over the intercom if I have to go to the bathroom.