(Kosciusko, MS) - Wow. I have come to a place I literally have never heard of. Kosciusko's got it going on! At the Super 8, when you check in they give you a room key and a remote control for the TV.
Over the last 22 weeks, I have stayed in at least a dozen different hotels. Even taking into account decades of travel to mundane locations and a few which have been spectacular, I can say with confidence this is the first time I've been issued a clicker by the desk clerk. It must be returned upon check-out, at which time the promise of free fresh donuts in the lobby should be fulfilled. There's a honeymoon suite at the Kosciusko Super 8, complete with a round bed and leopard print bedding. At least there's a sign that indicates there is. I have no intention of verifying this fact.
This is as close to Starkville as one can be and still have access to a room, and I'm just grateful to be still, quiet and dry. 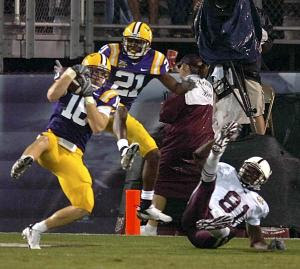 The LSU football team opened its season with a 45-0 trouncing (a word borrowed from my wife) of the Mississippi State Bulldogs. The game was played in an off and on downpour which did not dampen the enthusiasm of the purple and gold faithful who made the trip.
So, LSU is on its way to legitimizing its number 2 national ranking. I am on my way to exhaustion because of the need to hustle home for a Friday workday. I also may be on my way to embarrassment after roping in the LSU mascot for a goofy Joe Fan photo opportunity. 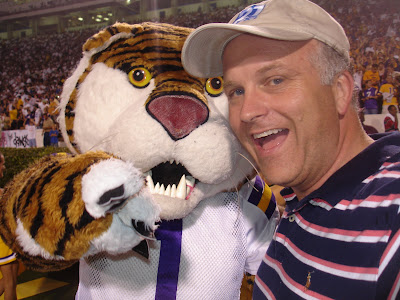 I don't think I really have anything to be red-faced about. After spending all of my adult life ethically constrained from being a fan, it's a little liberating to allow myself a goofy moment or two.
I'll see another shade of purple Friday night for Byrd High School and still another Saturday for the Northwestern State Demons.
After spending an evening in the rain, I'm less concerened about having a red face than a red something else. That convenient travel sized Gold Bond medicated powder really comes in handy sometimes.