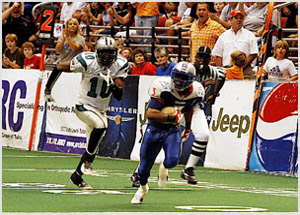 (Tulsa, OK) – The Bossier-Shreveport BattleWings’ remarkable run through the playoffs came to a disappointing conclusion as they lost to the Tulsa Talons, 67-47, in the af2’s National Conference championship game.
The BattleWings finish their season with 13 wins and 6 losses, and with victories in the franchise’s first two playoff games.
Bossier-Shreveport matched Tulsa stride-for stride in the first half. The Talons scored first to take a 7-0 lead, and both teams seemed to be scoring at will. The Wing’s usually reliable kicker, Brian Hazelwood, missed three first half point after attempts and a field goal attempt in the closing seconds of the 2nd quarter. The Talons led 27-25 at the half.
The BattleWings grabbed the lead to start the 3rd quarter when on 4th and 10 from their own 5-yard-line, Quincy Carter found Tramissian Davis for a 45-yard touchdown. Hazelwood’s point after was good, and the Wings led by five, 32-27. The BattleWings stopped Tulsa on downs and then opened their biggest lead of the game, 39-27, on a Jason Schule 9-yard touchdown run, his second of the game. On the ensuing kick-off, the ball bounded off the right rebound net and Tulsa’s Zac Jones recovered it at the 7 yard line and returned it to the one. Odie Armstrong bulled into the end zone, one of three rushing touchdown for Armstrong in the game, and the point after gave Tulsa a 40-39 lead.
The BattleWings would lead once more when Carter passed to Jamaal Perry for a 17 yard touchdown with 9:57 remaining in the game. Brian Hazelwood drop-kicked for two points to give the wins a 47-46 advantage.
Tulsa scored again to go up 53-47. As the BattleWings attempted to regain the advantage, Delenell Reid intercepted a Quincy Carter pass; and the Talons turned it right around for another score and a 60-47 lead. They would not trail again.
Carter finished the night 19 of 38 passing with five touchdown passes and two interceptions. Tramissian Davis and Jamaal Perry each caught two scoring passes. Marc Bacote had one. Jason Schule ran for two BattleWings scores. DE Elex Reed, who had an interception and a blocked kick, earned defensive player of the game honors. Tulsa’s Odie Armstrong rushed for 48 yards and three touchdowns to earn offensive honors.
Jeff Hughley of Tulsa was the Iron Man of the game.
Justin Allgood was 20 of 33 with five touchdown passes with one interception.
The Talons (17-2) will play the Wilkes Barre/Scranton Pioneers for the af2 championship Saturday night in Bossier City.