We Get to Keep Playing 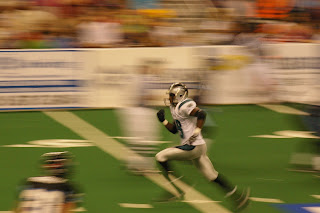 (N. Little Rock AR) – The Bossier-Shreveport BattleWings made a defensive statement on the first play of the ballgame and dominated the Arkansas Twisters on the way to a 62-40 af2 playoff victory. On the Twisters’ first play from scrimmage, quarterback Brian Villanueva was sacked by Bossier-Shreveport DE Elex Reed and fumbled the ball away. Reggie Hargrove of the BattleWings recovered the ball inside the ten yard line. Two plays later, Quincy Carter found Marc Bacote in the end zone for an eight-yard scoring combination and a 7-0 lead. The BattleWings would not trail in the game.
FB Jason Schule ran for four touchdowns and Carter threw for three, while Brian Hazelwood added three field goals for the Battlewings, who are in the playoffs for the first time in franchise history.
Carter completed 16 of 31 passes for 198 yards and scoring tosses to Bacote, P.J. Winston and Jamaal Perry. Bacote, who went the distance at Jack linebacker, was named Iron man of the game. Schule carried the ball eight times for 37 yards and four scores to earn offensive player of the game honors.
Brian Villaneueva of the Twisters threw one interception to Bossier-Shreveport’s Chris Ibezam and threw three touchdown passes. Back-up QB Davon Vinson ran for two Twisters scores. Ibezam shared defensive player of the game honors with the BattleWings’ Elex Reed, who recorded three sacks.
In the second round of the playoffs, The BattleWings will face the winner of Sunday’s game between Rio Grande Valley and Alabama. If the Dorados win, the game will be played in Hidalgo, TX. If the SteelDogs win, the game will be in Bossier City.
The BattleWings improve to 12-5 in 2007, the best record in team history.