If Only He Played for Another Team..... 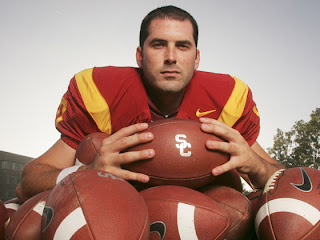 When the preseason college football polls were published, a young man from Shreveport vaulted to the top of the heap of Heisman hopefuls. John David Booty, a senior quarterback at the University of Southern California, is the early season favorite to win college football’s most revered trophy. His Trojans are ranked #1 in the nation. When you are the quarterback of the top-ranked team and you play in one of the largest media markets, you get the early benefit of any doubt.
The third of John and Sonja Booty’s four football-playing sons, John David made national headlines in 2003 when he skipped his senior year of high school to enroll early at USC. He had enough credits to graduate, but was eligible to play one more season at Evangel Christian Academy. His father’s long-time association with the school and its parent church abruptly ended, so the young quarterback packed up his newfound sense of emancipation and headed west.
The last two quarterbacks at USC, Carson Palmer (2002) and Matt Leinart (2004), won Heismans. Two years ago, Southern Cal running back Reggie Bush won it, so Booty certainly should benefit from a jaw-dropping recent history. Moreover, he set the expectation level for himself earlier this year in the Rose Bowl, passing for 391 yards and four touchdowns against a highly-regarded defensive unit from the University of Michigan.

Leinart’s success may work against Booty, in a way. After winning the Heisman Trophy as a junior, Leinart stunned many by coming back to USC for his senior season instead of opting for the riches of professional football. That meant Booty was forced to wait another year before ascending to the starting position. He was a solid, dependable performer in 2006, starting 13 games. He completed 269 of 436 passes for 3,347 yards and 29 touchdowns. He threw nine interceptions, which isn’t bad at all; but his numbers did not earn him many Heisman votes. In fact, he didn’t finish in the top ten in the balloting. So, there’s some concern that he lacks substantive experience.
The decision to leave home early comes into play here. If Booty had stayed on a traditional timetable, he would have two years of college eligibility remaining; but that is irrelevant now. This is his time to seize the moment. He is the marquee player at the nation’s most high-profile football program. The experts agree that the Trojans have all the tools in place to contend for national championship, and their Louisiana quarterback is the lynchpin. 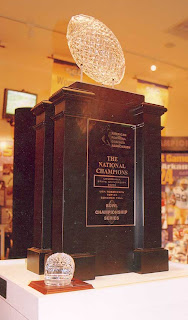 There are ironies, of course. Booty’s two older brothers, Josh and Abram, played football at LSU, which is ranked #2 to start the 2007 season. Tiger fans are still fuming because in 2003, Southern Cal claimed a share of the national title. LSU won the designated title game; but sports writers, in their poll, declared USC the national champion. In a perfect LSU world, both teams will go undefeated this year and the two schools will settle the score once and for all. Then there’s this, pointed out by sports writer Mike Cook: Exactly 50 years ago, another guy named John David won the Heisman Trophy. His last name was Crow, and he played at Texas A&M. Later in life, he was head football coach at Northeast Louisiana University.
Booty and his teammates will be on national television a lot this year. Their status and their schedule demand it. There’s plenty for people in Louisiana to watch. Maybe football fans in the state can have it all. Booty leads his team to an undefeated regular season, wins the Heisman, and then loses to LSU in the national championship game. Do you think Tiger fans would be gracious enough to offer congratulations, even if JDB wins it all?