A Run for the Border! 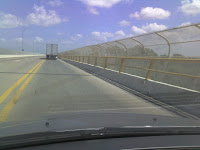 (Somewhere in Mexico) – The tug of adventure and impulsivity led me to cross the border. Literally minutes away from being an international traveler, the opportunity proved irresistible. So, boldly I went without an actual plan, crossing the Rio Grande on what suddenly felt like the Bridge to Oblivion.
The first thing I noticed was the automatic weapons. Guys with machine guns slung over their shoulders were loading into the back of a truck labeled “Policia.” Pretty much at that moment, the adventure was over for me; but onward I pressed deep into the epidermis of Mexico.
Did I mention there was not an actual plan involved? No companion, no map, no idea where I’m going except “Mexico!” The road signs are all in Spanish and the distances are measured in kilometers. Somehow, I thought there would be a town with shopping and bodegas and great salsa right over the border, but no. There were riverside shacks in which I assume some of this nation’s impoverished souls reside. There was a Road to Nowhere with flat scrub brush dotting the dirt as far as the eye could see. The swaying palms and decorative cacti of south Texas were nowhere to be seen. My imagination began to run amok. 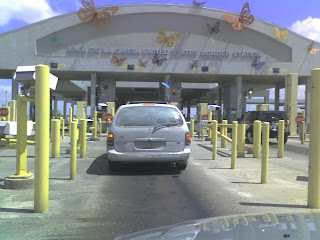 So, I turned around. I made a run for the border, hombre. God Bless America. My Great Mexican Adventure lasted less than an hour; and I was actually relieved to see the United States checkpoint. 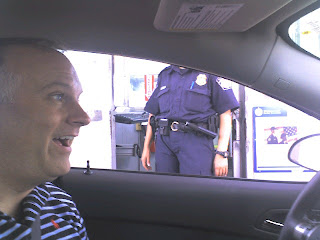 The border guard was kind as I explained that I was just in south Texas for the day and I had gone into Mexico for no apparent reason and was simply turning right around. She asked where I was from and why I was here and then dutifully inquired if I had anything to declare. I said, “I declare I’ll be glad to be back on U.S. soil.” She laughed politely at the idiot Gringo and waved me through.