When I learned that my daughter had tickets for Wednesday night's Dodgers' game against the Giants, I was thrilled for her. When Barry Bonds didn't tie Hank Aaron's home run record over the weekend, I realized there was the potential for her to be a part of something really special. I explained to her in great detail the history of the Dodgers-Giants rivalry and the significance of Bonds' pursuit of the record.
We were home in Louisiana, having been at Dodger Stadium the night before, and the phone rang. We were watching the Dodgers and Giants on TV and Bonds was in the on-deck circle. The caller ID lit up with our daughter's number, and I was so pleased. She was calling me from Dodger Stadium to share the moment with me. Bonds was hitting next!
I answered the phone, "Hi, Honey!"
She was at the stadium, alright. In the gift shop. "Dad, can I use the debit card to buy a Dodgers' jersey?" 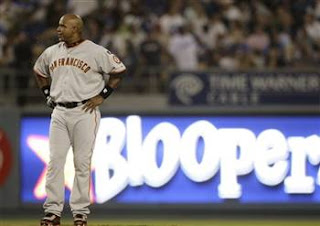 "Honey, Barry Bonds is hitting next."
"Yeah, I know. There's a TV in here. Look, can I speak to Mom?"
Purchase permission granted, the phone call was unceremoniously terminated. I had told her to save her ticket stub, but since Bonds didn't reach base there's no real point.
The sellout crowd left disappointed, with at least one obvious exception. My daughter wasn't a part of baseball history, but she know she probably will look cute in Dodger Blue.