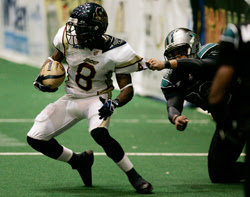 BOSSIER – SHREVEPORT 50 at Rio Grande Valley 45
(Hidalgo, TX) – A bitter Arena Football rivalry was renewed in a playoff setting and wasn’t decided until the final seconds, but the Bossier-Shreveport BattleWings emerged with a 50-45 af2 playoff victory. The teams played three times in 2007. The outcome of those games was determined by a cumulative twelve points.
BattleWings quarterback Quincy Carter threw three interceptions, one on his team's first offensive play of the game and another on the last, but also tossed four touchdown passes as the Wings improved to 13-5. The Dorados end their season 16-2, both losses at home to the BattleWings.
Rio Grande Valley scored on the opening possession on a Josh Kellett 18 yard pass to George Williams. The Dorados tried a two-point conversion, but it failed. The BattleWings responded with Carter throwing an interception, and on the first ensuing play, Kellet connected with Jermaine Carpenter for a 43 yard touchdown pass, and the Wings were in a 13-0 hole. Bossier-Shreveport fought back to tie the game 13-13 and took its first lead, 20-13 when Carter threw to P.J. Winston for 40 yards and a score with 3:11 remaining in the first half.
The Dorados tied it, but the BattleWings grabbed a halftime lead when Brian Hazelwood booted a 44-yard field goal as time expired in the second quarter.
The BattleWings received the kick-off to start the third quarter and marched 38 yards in six plays. Jason Schule ran four yards for a score, his second rushing touchdown of the evening, and the BattleWings had a 30-20 lead. They would not trail again, but RGV tied the score at 33 with 14:18 remaining in the game. The Battlewings responded with a 3-play, 45 yard drive which culminated in a Quincy Carter to Marc Bacote touchdown pass which gave the Wings a six-point lead.
Hazelwood, af2’s all-time leading field goal kicker, was a difference maker. He was successful on two field goal attempts of 44 yards and another from 46.
Carter threw touchdown passes to Jamaal Perry and Manwell Talbert in addition to Bacote and Winston. He finished the evening 18 of 30 with 214 yards. On the last play of the game, as he attempted to run out the clock while sitting on a five-point lead, he threw the ball high in the air. It was intercepted by Chris Canty, who lateraled the ball to Travis McAlpine. McAlpine raced into the end zone for an apparent score, but the officials ruled that Canty was down before he tossed the ball to McAlpine, and the game was over.
The BattleWings will play the winner of Saturday’s game between Tulsa and South Georgia for the conference championship.