Yes, I AM Ready for Some Football

We’re still struggling with a long, hot summer which has been uncharacteristically wet; but there’s hope on the horizon. Football is here, and not a moment too soon! We are still a few weeks away from a meaningful game, but at least there’s something for guys to talk about, with training camp, practice and rosy-eyed possibilities right in front of us.
Let’s start close to home and work our way west and south.

There’s a new hope at Louisiana Tech, where first-year football coach Derek Dooley has begun the process of turning things around. The Bulldogs are still starved for attention in this LSU-crazy state, and it will take winning consistently for people to notice them in significant numbers. That process may take some time. Tech’s home schedule is noteworthy this year, though. Circle October 20th on your calendar. That’s when Fiesta Bowl champion Boise State comes to Ruston. Also notice November 10th, when the Bulldogs visit Baton Rouge.
That will be LSU’s tenth game of the season, and homecoming. The Tiger Faithful believe the Bulldogs may be staring into the teeth of a 9-0 monster by then, but I’m not so sure. 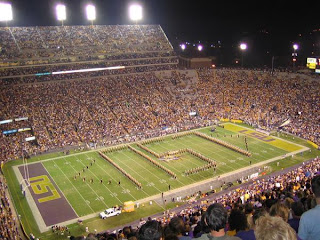 The pieces are in place for another remarkable season on the bayou; but a national championship may not be in the cards. Virginia Tech, Florida and Auburn will provide stiff challenges; and dare we even speak of November 3rd, the week before homecoming? That’s when the Tigers will be in Tuscaloosa to play Alabama, coached by Nick Saban.

Saban, of course, coached LSU to its national championship just a few years ago. Emotions should be at a peak the first Saturday in November. Depending upon how the season has gone to that point, and how things go in Alabama, things could be pretty interesting in Death Valley when Tech comes to play.
All of that is way down the road, of course; but isn’t it a lot of fun to think about the possibilities? That’s what August is all about for football fans.
As long as we’re in south Louisiana, we might as well think about the Saints. 2006 was a magical year for the team and its fans.

Coach Sean Peyton, quarterback Drew Brees and Heisman Trophy winner Reggie Bush gave everyone in the beleaguered city something to cling to and cheer about. With a year of experience behind them, there’s every reason to believe the Saints will be even better this year. Anything short of an NFC championship and a trip to the super Bowl will be a disappointment. After years of emotional abuse at the hands of a perennial loser, Saints fans can come out of the shadows and revel in legitimate hope of NFL glory.
How profound is the Saints’ rise to prominence? They actually are the primary topic of NFL talk in northwest Louisiana these days. The Dallas Cowboys may have what it takes to change all that. While it seems odd to say the Saints have won a post-season game more recently than the Cowboys, it certainly is true. The 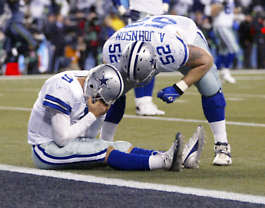 Cowboys are one botched hold away from a completely different circumstance, though. The man who dropped the ball, Tony Romo, seems to have the skills and charisma necessary to lead his team in the general direction of playoff success. Cowboys’ fans have been forced into dark little corners while their team struggles. They may step into the incandescent glow of on-field success this year.
That is the joy of the last full month of summer. August leaves us sweaty with anticipation, content in the knowledge that whatever is to become of our favorite football team this fall, we will have a good time watching it unfold.