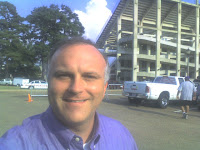 (Natchitoches, LA)- Three games in three nights. What a way to start the football season. I had a new experience as the Northwestern State Demons manhandled Henderson State 41-6. I watched the game from the President's box. That would be the president of the university, the affable Randall Webb. My wife is a bit of an NSU dignitary, hence the invitation to Turpin Stadium's penthouse.

I was happy to be there, because the game started in a driving rain storm, and I was wet enough two nights ago in Starkville. Everyone was polite and welcoming and it was like going to a dinner party with a game as a backdrop.
Being in the big glass perch was a little like being in a press box with a couple of exceptions. First, everyone was dressed better than your typical media member. Second, cheering is more than acceptable, it's apparently encouraged. You have to let the president know you support your Demons. 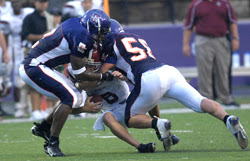 This is foreign to me, and a little bit strange. I mean, you're six levels up and behind thick glass. The players can't hear you clap or cheer, and certainly all that yelling and carrying on interferes with polite dinner party conversation.
Every team I went to see was wearing some shade of purple and won its game handily. You can't win 'em all if you don't win the first one, so it looks like the season is off to a good start.