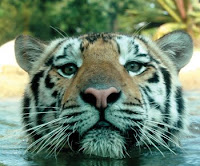 (Baton Rouge, LA) - LSU has a new live mascot, a tiger formerly named Roscoe who was officially installed as Mike VI this week. Early accounts of Roscoe/Mike's adjustment to his new home on campus have been promising. He is said to be an engaging young bengal not afraid of people. Naturally, the kids love him! Saturday, as tens of thousands of fans descended upon Mike's habitat in the hours before the football team played Middle Tennesssee, the big cat showed his shy side.

He hid under a bush and took a nap, which led to people crouching and peering through the foliage on the west side of his enclosure just to catch a glimpse of a paw or a stripe. It was all great fun, and the best anyone could do because Mike VI is not quite ready to be rolled around the stadium in a cage with cheerleaders on top as his predecessors have done. All in due time. A tiger's got to get his roar on. 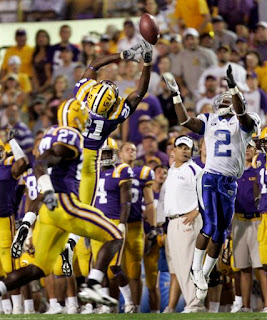 His human counterparts certainly did, holding the Blue Raiders to less than 100 yards in total offense in a 44-0 victory. LSU is now 3-0 and ranked #2 in the country. The offensive has scored in the 40's in all three games, while the defense has allowed just seven points all year.
Speaking of the 40's, I just can't get past the way LSU's long-time public address announcer pronounces the word. To my ear, it sounds like he said "farty" every time. When there are 20 yards on a football field between the farties, that can lead to high hilarity for the juvenile mind. But, hey...that's just me.
It's been a busy start to the football season. My wife has marveled even at herself: Three college football weekends and she has been to games in three Louisiana cities. I knew there was a reason I keep her around. 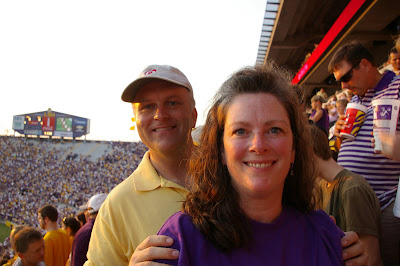