The Flying Freak Out 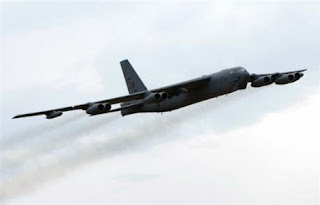 The news that a B-52 carrying nuclear weapons flew from North Dakota to North Louisiana is causing a little bit of a freak-out; and now the conspiracy theorists are in high twitter.
I guess I'm naive, but I've grown up watching B-52's fly overhead routinely. I didn't think about it, but I guess I kind of assumed they sometimes had weapons of mass destruction on board. This isn't TNT we're talking about. The detonation of a nuclear device, as I understand it, has to be carefully planned and coordinated. It's not like if the thing fell off the airplane some kid in Haughton could walk up, pull the pin and blow Bossier Parish to oblivion. Or, could he? I guess I don't know.
The point, I suppose, is that our Air Force lost track of the weapons for a significant amount of time, and that obviously is deeply disquieting. Even more troubling, since nothing terrible actually happened, is the voice of paranoia erupting from the blogosphere and beyond. There is concern that all of this is a giant propaganda ploy. The thinking is there is no way this news could have leaked, that this is some kind of message.
The transport of nuclear weapons to Barksdale may be routine, although this incident if truthfully reported is out of the ordinary. People wearing tinfoil hats are not so quietly concerned that this forbodes an attack on Iran, which could lead to The Big One, WWIII.
I am a robust advocate of holding the powerful accountable, so bringing these notions to light isn't a bad thing. I just have a hard time wrapping my brain around the concept that our government would be so manipulative as to manufacture a perception of incompetence to further a warmongering agenda.
There it is, though, quite literally landing close to home. Keep your eye on the sky.